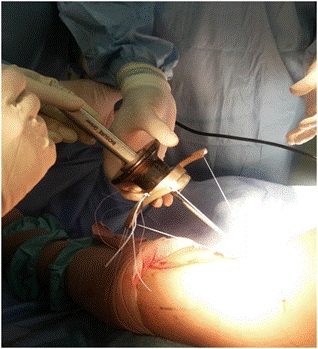 Background: Anterior Cruciate Ligament (ACL) reconstruction is commonly performed to restore knee kinematics and halt the progression of osteoarthritis. A primary variable that could influence the outcome of ACL reconstruction is the tension applied to the graft at the time of fixation. If the tension is too great, an abnormal compressive force could potentially develop across the tibiofemoral joint, hindering knee motion, and subjecting the articular surfaces to increased stress. If the tension in the graft is too low, the graft will not be effective in restoring normal kinematics. The Tegner Lysholm Knee Scale is a functional scoring for patients with ligamentous injuries. It is a patient-reported measure of knee function and is important for comprehensive assessment conditions in both the clinical and research context. Our objective was to compare which tension technique (15 lbs graft tension using a Mitek Tensioner™ vs maximal sustained two-hand technique) would yield better functional outcome at 6 months and 12 months postoperatively using the Tegner Lysholm Knee Scale.

Methods: Twenty-nine patients who underwent arthroscopic ACL reconstruction at the University of Santo Tomas Hospital Private Division were randomly divided equally into two groups (group A or group B). During tibial fixation, group A would receive 15 lbs graft tension using a Mitek Tensioner and group B would receive graft tension using the maximal sustained two-handed pull technique. The patients underwent a standard rehabilitation protocol at an institution of their choice and a Lysholm Scoring Scale and Tegner activity scale were self-administered at 6 months and 12 months after the surgery in order to assess their functional outcome.

Results: The results showed that the functional outcome scores of group A were higher than group B. The yielded p-value was 0.10 (6 months), 0.07 (12 months) for group A and 0.27 (6 months), 0.46 (12 months) for group B. The results showed no sufficient evidence of a significant difference between the effects of arthroscopic ACL reconstruction with 15 lbs weight using a Mitek Tensioner (group A) and graft tension using the maximal sustained two-handed pull technique (group B) in the knee functional outcome of patients at 6 months and 12 months postoperatively.

Conclusion: The functional outcome scores of patients who underwent ACL reconstruction using different graft tension did not show significant results. Further re-evaluation of patients' functional outcome score is necessary after 12 months postoperatively. The desired tensioning technique of the ACL surgeon would be at his/her convenience knowing beforehand the pros and cons of each technique.