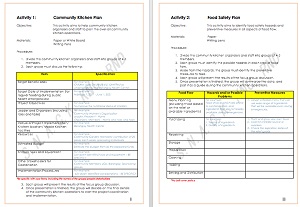 The Philippines is ranked third among 171 countries, as per the World Risk Report 2018, with the highest risks to multiple hazards and susceptibility in terms of the impact[1]. Climate risk and hunger are correlated, especially in areas with pre-existing issues on food security[2]. Philippines is ranked 70 out of 117 qualifying countries with the Global Hunger Index score of 20.1, translated to a serious hunger situation[3]. With the country’s pre-existing hunger problem, the hazards are at stake, and the higher odds of experiencing food insecurity.

In 2017, during the World Food Program’s strategic review of Food Security and Nutrition in the Philippines, one of the recommendations in the micro level (community and households) was to address the nutritional issue through feeding programs, community gardens, emergency reliefs and fortification. Citing those all lead to the functioning of a community kitchen.

A community kitchen is an organized community-based cooking program used to address hunger and food insecurity through regular activities for families within the local community[4]; which does not only promote nutrition through soup kitchen, but also as a training site for locals and community farmers to create local businesses that will strengthen the economy and lessen the produce cost[5].

Apart from the positive impact on nutritional status and socio-economic aspect, community kitchens are also used in several relief operations, such as in the networks of food banks as it increases the food distribution rate, hence, a faster measure in addressing food insecurity during disaster or emergencies[6]. Thus, it is very timely to discuss community kitchens, as Corona Virus Disease 2019 (COVID-19) created an impact on the trade of goods, resulting in the disruption of food availability and accessibility, and negatively affecting the global food security[7].

During the COVID-19 pandemic, several local government units used community kitchens, like that of Pasig City to ensure that its frontline workers were provided with food packets for lunch and dinner; and municipalities in Region 10 Northern Mindanao, ie, Manolo Fortich, Maramag and Sumilao, Bukidnon and Cities of Ozamiz and Valencia, supervised by the National Nutrition Council officers following the principles of Pinggang Pinoy in their food preparation to ensure variety, moderation and balance in terms of the nutritional content in food selection[8].

Moreover, since a community kitchen may address food insecurity and improve the nutritional status, it also addresses the Sustainable Development Goals number 2 and 3, which are zero hunger, and good health and well-being.

The project focused on the creation of a community kitchen manual for use during public health emergencies, including the pandemic. It comprised of guidelines on the menu planning, food safety practices, accessibility concerns, as well as the different forms and intended use for nutrition programs.

The development of the manual involves three phases. In the first phase, the design stage, was covered in this community project.

The UST Faculty of Medicine and Surgery formalized the approval of the project proposal and protocol. Coordination through written endorsements was made to the UST Simbahayan, Faculty of Arts and Letters Simbahayan, and the Samahan ng Nagkakaisang Kababaihan ng BASECO.

Regarding the phases two and three, specifically the “implement stage” and the “validation/evaluation stage”, these were not yet conducted in this project.

The project investigators initially considered an area in Metro Manila, since 40% of the 13.3M of its population are living in the slum community[9]. Out of the different Metro Manila communities, the Bataan Shipping and Engineering Company (BASECO), in Manila City, which is considered an informal coastal reclamation area was selected. BASECO was identified with socio-economic needs, and at the same time a disaster risk area due to its location.[10]

Since the consideration was an existing community kitchen, the proponent identified The BASECO Women's Organization (Samahan ng Nagkakaisang Kababaihan ng BASECO), as a local registered group in Zone 68, Barangay BASECO, Manila City, organizing a community kitchen, particularly a feeding program. The organization is also a partner community of the University of Santo Tomas.

The community kitchen started their initial and independent feeding program on last July 2020. The members/officers who directly planned the menu, prepared and served the food, assessed the children’s nutritional status, were chosen as the respondents of this project. There were eight direct members involved in the preparation and operation of the community kitchen who participated in the focus group discussion via Google Meet. As per the respondents, the community kitchen was located in the organization president’s lot area. The community also has an existing Barangay Health Center, possible for future health project collaborations. Additionally, in 2018, there was Klinika Tomas, a free medicine dispensary built in collaboration between the organization and University of Santo Tomas.

Also, as per the Medical Report Philippines 2017, the BASECO Compound, which was the study site, belongs to an urban poor area having less access to medical services, and even with issues on daily food.[9] Additionally, as per the same source, one of the recommended follow-up plans for the 15.7% checked BASECO children was to undergo a feeding program. Thus, the functional community kitchen, as the focus of this project, could help in addressing nutrition issues, as one of the health concerns of BASECO.

During the focus group discussion, the proponent and select community kitchen organizers were able to tackle practices of the group in terms of its operations. The discussion focused on menu and nutrition considerations, food flow practices, costing and forms used. All these practices were taken into consideration to determine what will be the final contents of the manual that a lay person could implement in his/her own community kitchen. Therefore, activity forms were also provided to step-by-step guide the organizers in providing safe, nutritious and accessible meals during public health emergencies, like in the time of COVID-19 pandemic.

As per the respondents, the feeding program that the group organized during this pandemic was its first initiated and planned community kitchen program. The community kitchen was situated in the house of the organization’s president. Materials and equipment such as cooking utensils were provided by the members of the BASECO Women’s Organization. The program was supposed to last only for 30 days, but with the funding sponsors, the whole program lasted for 162 days. The program operated daily, providing lunch, and served 51 children aged 3-10 years old. However, the group mentioned that the project was launched without an actual nutritionist-dietitian guiding them in the program. There were also no Barangay nutrition scholars involved in the program. Still, the weight of children was monitored weekly through the use of a bathroom scale.

Further, the following practices were noted and served as additional discussions, as elaborated in the proponent’s community kitchen manual:

In several areas of the Philippines, local government units and private individuals revived community kitchens during the COVID-19 pandemic, a public health emergency. In Iloilo, for instance, there were 241 daycares and barangay halls, converted to community kitchens, providing 1,903,036 meals to more than 16,000 families. Another urban poor community, San Roque in Agham Road, organized a community kitchen, feeding 3,000-4,000 families during the Enhanced Community Quarantine[13].

In terms of the select respondents for this project, the Samahan ng Nagkakaisang Kababaihan ng BASECO – BASECO Women’s Organization, the group initiated the feeding program during this pandemic to address hunger among children, a vulnerable population; as the pandemic resulted in economic difficulties – unemployment[14], wherein the parents of children-participants were also affected. Thus, lower income may also result in few food supplies.

Finally, it is highly recommended that the remaining phases of the project be executed to validate the manual contents. Also, the manual should have the Filipino version since the proponents aim to implement the use of it in the community. It would be ideal to have the final manual translated by the UST Sentro ng Salin.

The proponents would like to thank the University of Santo Tomas for allowing the conduct of this project. To Asst. Prof. Froilan Alipao, Asst. Prof. Maria Carinnes Alejandria, and Asst. Prof. Ronald Castillo for helping us coordinate the project with the community. The Samahan ng Nagkakaisang Kababaihan ng BASECO, for willingly participating in this project.

Figure 1: The front page of the developed community kitchen manual

Figure 2: Sample topics of the manual

Open Access This article is licensed under a Creative Commons Attribution-NonCommercial-ShareAlike 4.0 International License, which permits use, share — copy and redistribute the material in any medium or format, adapt — remix, transform, and build upon the material, as long as you give appropriate credit, provide a link to the license, and indicate if changes were made. You may do so in any reasonable manner, but not in any way that suggests the licensor endorses you or your use. You may not use the material for commercial purposes. If you remix, transform, or build upon the material, you must distribute your contributions under the same license as the original. You may not apply legal terms or technological measures that legally restrict others from doing anything the license permits. The images or other third party material in this article are included in the article’s Creative Commons license, unless indicated otherwise in a credit line to the material. If material is not included in the article’s Creative Commons license and your intended use is not permitted by statutory regulation or exceeds the permitted use, you will need to obtain permission directly from the copyright holder. To view a copy of this license, visit https://creativecommons.org/licenses/by-nc-sa/4.0/.