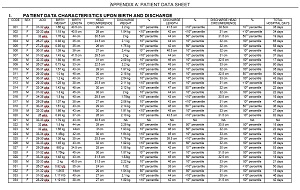 There has been an improvement in the survival of preterm infants due to advancements in neonatal care. Preterm birth is defined as being born before 37 weeks of gestation associated with major morbidities which include abnormal neurodevelopment outcome related to inadequate nutrition during the early postnatal period. Therefore, timely nutritional care is important in optimizing neurodevelopment outcome among preterm infants.[1]

Aside from prematurity, postnatal growth failure is extremely common among the very low birth weight (VLBW) infants - birth weight of less than 1500 g and related with higher risk of poor neurodevelopment outcome.[2] VLBW infants at times demonstrate difficulties across a wide range of domains: cognitive, language, motor, and behavioral functioning.[1]

The goal of nutritional therapy for both preterm and VLBW infants is the achievement of postnatal growth at a rate that approximates the intrauterine growth in the normal fetus. This goal is best achieved with effective enteral feeding. However, early enteral feeding is commonly limited among this population due to the immaturity of gastrointestinal motor function.[3] Also, even if enteral feeding is being done, the oral feedings given often do not provide the adequate nutrition until full feeds were achieved which might take 7 to 10 days. To address these limitations, early parenteral therapy is initiated soon after birth. Of the major nutritional components, proteins are essential for normal growth and development. Preterm and VLBW infants given intravenous amino acids showed evidence of enhanced growth in the part of the brain responsible for cognition, as proven by an increase in head circumference and brain size.[4] Multiple studies have been done regarding the dose of amino acid therapy to be given to VLBW and preterm infants. With this, the current standard of nutritional therapy is early amino acid therapy, defined as initiating 3.0 g/kg/day of amino acids within the first 24 hours of life. One of the major limitations of the systematic review is the lack of studies that pertain to the long-term effect of nutritional therapy by giving amino acids, particularly the neurodevelopment outcome of preterm and VLBW infants.[5]

This was a prospective cohort study conducted at the High Risk Clinic of the Outpatient Department of a tertiary hospital which included preterm and very low birth weight newborns admitted at the neonatal intensive care unit (NICU). In this study, we want to determine the growth and neurodevelopment outcome of preterm and very low birth weight infants admitted in the NICU who were given early amino acid therapy. Newborns with major congenital or metabolic abnormalities and asphyxiated infants were not included in the study.

All newborn infants who met the inclusion criteria admitted at the NICU were included in the study provided that the informed consent was signed by the parent/caregiver. All subjects were started on parenteral nutrition containing amino acid (6% Aminosteril) at 3 g/kg/day within 24 hours of life, in accordance with the standards of nutritional therapy. Enteral feeding was initiated as soon as possible and tapering down of amino acids was started once the patient could tolerate 70 ml/kg/day of enteral feeds. The subject’s weight and length as well as head circumference was measured until upon discharge and plotted against the Fenton Chart. Once discharged, subjects were followed up at the 6th, 9th, and 12th month of corrected age and assessed by the investigator using the Bayley Scales of Infant and Toddler Development – Third Edition (BSID–III) Screening Tool, neurodevelopment parameters were assessed: cognitive, language, motor, social-emotional and adaptive behavior scales while taking note of weight, length and head circumference and plotted against the WHO growth charts. The results gathered underwent statistical analysis and if determined to have neurodevelopment delay, an immediate referral to a specialist was done.

The sample size was calculated using a formula devised by Krejcie and Morgan and yielded a result of 34 participants.

A total of 34 participants were included in the study, but only 29 participants completed the study. The five patients who dropped out were admitted in our institution, but were unable to follow-up. To maintain prognostic balance generated from the original random treatment allocation, the data was canned by using the intention-to-treat (ITT) procedure. Per-protocol population is defined as a subset of the ITT population who completed the study without any major protocol violations, to provide information about the potential effects of treatment policy rather than on the potential effects of specific treatment.

Table 1: Demographic profile of the respondents included in the study

The collected data on demographic profile of the respondents were tabulated and presented in frequency, percentage, and mean ± SD as shown in Table 1. Evidently, the patients were equally distributed in terms of gender. Majority of the subjects were classified as very preterm and very low birth infants with mean birth weight of 1.35 kg. The birth lengths were distributed at a range interval of 30 and above with mean birth length of 40.6 cm. The head circumferences had an average of 28.22 cm. Most of the subjects stayed 15 to 40 days in the hospital with an average of 38.59 days.

Table 4: Paired T-test analysis on weight, linear growth and head circumference of the respondents from the baseline to 12th month of corrected age

Major developments in neonatal care have resulted in improved survival of preterm infants.[4] Despite this, poor weight gain remains the most frequent morbidity seen in VLBW infants. Another frequently occurring morbidity seen is neurodevelopment impairment. There have been extensive studies that link neurodevelopment impairment and early undernutrition.[1] With these findings, it has been the standard of care to start very preterm and VLBW infants with early aggressive amino acid therapy, that is, giving 3 g/kg/day of amino acid as early as 24 hours of life. This accounts for the 0.3 g/kg/day to mimic intrauterine changes in the body composition, + 2.2 g/kg/day to 2.5 g/kg/day for normal growth + 1 g/kg/day for the obligatory urinary and dermal protein loss. Recent studies have shown that protein delivery of 3 g/kg/day beginning on day 1 of life is safe and associated with plasma amino acid concentrations similar to those of a second and third trimester fetus.[7]

A systematic review which compared early and late administration of amino acids among preterm infants included seven randomized controlled trials that showed safety in administering 3 g/kg/day of amino acid as evidenced by normal blood urea nitrogen levels despite positive nitrogen balance with a variable finding with regard to its effect on head circumference growth.

During the past 10 years, there has been an increasing number of screening tests available to assist physicians in identifying babies who may need further assessment. The Bayley Scales of Infant and Toddler development, Third Edition (BSID–III) Screening Tool was developed to assess the infant using different domains: cognitive, language, fine and gross motor movement among infants aged 0-18 months of corrected age. With minimal training, the test can be administered by the members of health care.[8]

Analysis of the study results showed that the subjects included more of very preterm and VLBW infants who stayed at the NICU for at least 15-27 days as shown in Table 1. Of the 34 respondents, only 29 completed the study. Since our institution is a tertiary and referral hospital, we get patients who live far away from our area, making follow up after discharge difficult.

Lastly, table 4 showed the paired t-test analysis of baseline anthropometrics in comparison to measurements taken upon discharge and follow up and showed significant results.

Very preterm and VLBW infants are considered a high risk population in developing long-term complications related to prematurity such as problems in growth as well as neurodevelopment delay. Early identification of such complications is important for prompt intervention.

The results of this study clearly illustrate the long-term benefits of giving early aggressive amino acid therapy among high risk neonates, specifically in terms of growth and neurodevelopment.

However, one of the limitations of this study is the number of patients who were unable to complete the study. Also, the study, only followed up participants up to 12 months of corrected age, and it would be better if they can be followed up until 2 years of age and longer.

This research only focused on the nutritional intervention, in the form of early amino acid administration, and since neurodevelopment delay can be multifactorial, another recommendation for future studies is to include other factors that may influence the outcome of having neurodevelopment delay such as episodes of hypoglycemia, sepsis, etc.

This research would not have been possible if not for the support of the Department of Medical Education and Research, Research Ethics Committee, as well as the Section of Newborn Medicine of the University of Santo Tomas Hospital. The author would also like to acknowledge Mr. Noel Potenciano for the assistance in doing statistical analysis of this study.

Open Access This article is licensed under a Creative Commons Attribution-NonCommercial-ShareAlike 4.0 International License, which permits use, share — copy and redistribute the material in any medium or format, adapt — remix, transform, and build upon the material, as long as you give appropriate credit, provide a link to the license, and indicate if changes were made. You may do so in any reasonable manner, but not in any way that suggests the licensor endorses you or your use. You may not use the material for commercial purposes. If you remix, transform, or build upon the material, you must distribute your contributions under the same license as the original. You may not apply legal terms or technological measures that legally restrict others from doing anything the license permits. The images or other third party material in this article are included in the article’s Creative Commons license, unless indicated otherwise in a credit line to the material. If material is not included in the article’s Creative Commons license and your intended use is not permitted by statutory regulation or exceeds the permitted use, you will need to obtain permission directly from the copyright holder. To view a copy of this license, visit https://creativecommons.org/licenses/by-nc-sa/4.0/.