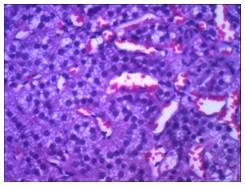 Pheochromocytomas are catecholamine-secreting tumors originating from the chromaffin cells of the adrenal medulla. On the other hand, paragangliomas are catecholamine-secreting tumors located in the sympathetic ganglia. These are rare tumors with an incidence of 0.2% to 0.6% among hypertensive patients.[1] A high clinical suspicion accompanied by extensive workup brings about its diagnosis.

The prolonged exposure of myocytes, coronaries and cerebrovascular arteries to catecholamines has shown to increase the risk for myocardial infarction, angina pectoris, cerebrovascular accident, and transient ischemic attack.[2] If left untreated, it may lead to death. The definitive treatment is surgical removal of the hyperfunctioning dominant adrenal gland with adequate alpha-adrenergic blockade and calcium channel blockade preoperatively.

This case series aims to examine the outcome of systemic hormonal unloading through unilateral adrenalectomy in three pheochromocytoma cases.

This case series was done in accordance with the Declaration of Helsinki. Written informed consent was obtained from the patient for writing and publication of this case series and the accompanying images (specimen images and histopathology slide image). This was also reviewed and approved by the Research Ethics Committee of University of Santo Tomas Hospital.

CASE 1: A 20-year-old male presented with BP of 150/100 mmHg, sweaty palms, anxiety, easy fatigability, dizziness, and frequent grade 3-6/10 throbbing occipital headaches that he banged his head to the wall with minimal relief of headache. His highest BP was 170/100 mmHg and his usual BP was 130-140/80 mmHg with maintenance medication of terazosin 5 mg/tab 1 tablet once a day (OD) and amlodipine 10 mg/tab 1 tablet OD. On physical exam, his BP was 130/80 mmHg, heart rate (HR) 80-90 bpm, height 170 cm, weight 90 kg, BMI 31.14, waist circumference 90 cm, with acanthosis nigricans, but no cushingoid features, no eye signs, no thyromegaly. He had a flabby abdomen and a normal neurologic exam.

He underwent right open unilateral adrenalectomy. The adrenal gland (Figure 1) appeared grossly normal with a size of 3.0 x 2.0 x 1.0 cm. On histopathology, there was a 0.1 cm adrenal cortical layer and a thin adrenal medulla that had a tan to dark brown, smooth, solid cut surfaces. There was an ill-defined lesion measuring 0.5 x 1.1 x 0.1 cm and with light brown smooth cut surfaces and areas of hemorrhages. Microsections (Figure 2) disclosed an inconspicuous aggregate of neoplastic polyhedral cells in alveolar pattern located in the adrenal cortex measuring 1.2 mm. These cells had round to ovoid nuclei, occasional prominent nucleoli, and finely granular amphophilic cytoplasm. The adrenal medulla grossly measured 0.15 cm. Microsections of the unremarkable medulla disclosed scattered ganglion cells with anastomosing cords and trabeculae of chromaffin cells, which were separated by venous channels. The ganglion cells had round vesicular nuclei, occasional prominent nuclei, and abundant amphophilic cytoplasm. The chromaffin cells had round hyperchromatic nuclei, inconspicuous nucleoli, and abundant, finely granular, eosinophilic cytoplasm. The immunohistochemical staining showed synaptophysin positive, chromogranin and calretinin negative.

CASE 2: A 51-year-old male presented with anxiety and panic attacks, sweating, palpitations, throbbing headaches, insomnia, family history of neurofibromatosis, and BP of 220/110 mmHg. His BP was controlled with terazosin 5 mg/tab 1 tablet OD and amlodipine 10 mg/tab 1 tablet OD. He has coronary artery disease and gastroesophageal reflux. He drank alcohol occasionally. One of his siblings had neurofibromatosis. He used to smoke for a total of 40 pack years. On physical exam, he was conscious, coherent, and anxious. His vital signs were as follows: BP 120/80 mmHg, HR 72 bpm regular. He had warm, moist skin, with multiple non-tender, soft, non-pigmented nodules approximately 2.0 x 2.0 cm on the left pre-auricular area, posterior and anterior aspect of left upper extremity, and anterior aspect of the right thigh. He had palmar erythema and clubbing of fingers on both hands. No eye signs such as exophthalmos, lid lag or proptosis. No thyromegaly. He had clear breath sounds. The cardiac exam showed a dynamic precordium, normal rate, regular rhythm, no murmurs, apex beat at the fifth LICS MCL. The abdomen was flabby, soft, and nontender. The neurologic exam was normal.

Postoperatively, his lowest BP was 110/80 mmHg. He reported a significant reduction in his palpitation, headache, and no panic or anxiety attacks. A repeat psychiatric testing showed improvement in the degree of his anxiety and depression: HAM-A of 9 from 33, HAM-D of 14 from 10 and MADRS of 9 from 23. His usual BP range was 100-130/60-80 mmHg with only amlodipine 5 mg/tab 1 tablet OD. On follow-ups, his vital signs are BP 140/100 mmHg and HR 60 bpm regular. The cardiopulmonary and gastrointestinal examinations were unremarkable. The cranial nerves were intact.

Post procedure, her lowest BP was 110/70 mmHg; she had less headache and dizziness. Her maintaining BP is 110-140/70-90 mmHg on amlodipine 5 mg/tab 1 tablet BID; there was no recurrence of headaches.

The symptoms of our patients were consistent with pheochromocytoma. These manifestations are products of catecholamines on various receptors of the body. Catecholamines work on the α1 and α2 receptors resulting in vasoconstriction and secretion of sweat glands leading to pallor and diaphoresis, respectively. Vasoconstriction effect of the α1 and α2 receptors can also increase BP while the effect on β2 receptors is vasodilation.[1] The combination of the two effects can affect the sympathetic reflex leading to orthostatic hypotension. In the brain, the catecholamines on the α1 and dopamine1 receptors can produce vasoconstriction; subsequently, resulting in a headache. The effect of catecholamines on the β1 receptors in the kidneys is increased renin secretion.[3] The increased renin production can stimulate the renin-angiotensin-aldosterone pathway contributing to hypertension as well.[1] The palpitations, tachycardia, and angina can be attributable to the effect of catecholamine in the β1, β2 and dopamine1 receptors that can increase the rate, contractility, automaticity, and conduction velocity of the heart.[4]

Among the many clinical manifestations of pheochromocytoma, hypertension (80.7%) was reported to be the most sensitive symptom, closely followed by headache (60.4%), palpitation (59.3%), and diaphoresis (52.4%). The triad of pheochromocytoma (58%) is also sensitive but presents in only a few patients.[5] Truly, there is no single clinical finding that can define pheochromocytoma, but a good clinical judgment accompanied by thorough workup is necessary.

In a study by Asis, et al. [7], it showed the value of bilateral adrenal vein sampling (BAVS) with glucagon stimulation to clinch the diagnosis of pheochromocytoma and localize the small tumor. Among the 41 participants, 20 were diagnosed with unilateral pheochromocytoma; 16 were suspected of bilateral adrenal hyperplasia; the remaining 5 patients were considered normal. The study proved that BAVS with glucagon stimulation was a safe and effective tool to diagnose pheochromocytoma. In BAVS, the use of the glucagon test to establish a positive result depends on the significant increase in plasma concentrations of norepinephrine within 3 minutes of an intravenous bolus injection of glucagon. This evoked release appears dependent on the presence of the glucagon receptor.[8]

In a long-term follow-up study among pheochromocytoma patients, it was noted that they have higher cardiovascular events compared to patients with essential hypertension. The excess event rate is attributable to the prolonged exposure to the toxic effects of tumoral catecholamines.[3]

If the pheochromocytoma is left untreated, this could be detrimental to the patient’s health. The prolonged exposure to catecholamines results in sustained hypertension, myocarditis, cardiomyopathy, lethal arrhythmias, impaired glucose tolerance, overt diabetes mellitus, organ ischemia, and severe organ dysfunction.[9,10] The debate goes on if these effects are reversible or not. Some say that the cardiomyopathy may be reversible, but the study of Ferreira proved that there was an increased incidence of focal myocardial fibrosis in both newly and previously diagnosed cases of pheochromocytoma. Moreover, it implied that the damage persisted even after definitive surgical treatment.[11]

In cases where bilateral adrenal glands are hyperfunctioning, once the dominantly secreting adrenal gland has been localized through careful and precise bilateral adrenal vein sampling, unilateral adrenalectomy can be done to unload the system of excess catecholamines. The study of Malong, et al. proved that BAVS with glucagon stimulation is a valuable tool that localizes the dominantly secreting adrenal gland that can be surgically removed in patients with bilateral pheochromocytoma. This not only alleviates chronic hypertension but also stops the progression of cardiometabolic complications.[8] giving patients a brighter and healthier future.

A study of Zhou, et al. [12], recommended that surgical management should aim at the improvement of life quality in MEN1 and prevention of fetal tumors in MEN2.

The strength of this study lies in the good judgment of the medical team in managing these cases to undergo BAVS and proceed with unilateral adrenalectomy for the purpose of unloading the system of the harmful effects of excessive catecholamines. The limitation of this study is the lack of a tool to measure qualitatively and quantitatively the quality of life pre- and post-surgery for pheochromocytoma patients.

In conclusion, this case series has emphasized the importance of systemic hormonal unloading via unilateral adrenalectomy of the dominant adrenal in pheochromocytoma patients that results not in improved BP control, but more importantly, a better quality of life.

There is no conflict of interest.

This study was published in abstract form in ENDO 2018 and SICEM 2018. No external funding was used in the completion of this research.

Figure 2. H&E staining of right adrenal cortex under HPO. Aggregate of neoplastic polyhedral cells in an alveolar pattern in the adrenal cortex.