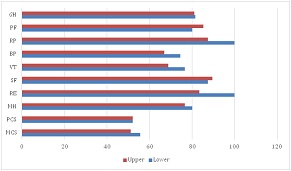 Tuberculosis is known to be transmitted primarily through droplet inhalation or ingestion of Mycobacterium tuberculosis. The initial exposure can lead to infection that can be cleared by the host leading to a primary infection. This infection, however, can be reactivated from a latent infection. Hence, lymphogenous, hematogenous, or contiguous spread to other tissues and organ systems can occur. This is a disease that affects more commonly in developing countries and rare in developed countries. According to the World Health Organization 2014 global report on tuberculosis: It remains one of the world’s deadliest communicable diseases. In 2013, 9 million people were reported to have acquired TB and 1.5 million died of the disease, of which 360,000 were HIV-positive. On a positive note, cases of TB are declining each year. It is reported that 37 million lives were saved between the years 2000 and 2013 through prompt diagnosis and treatment.[1]

Pulmonary involvement is the common site of TB but this deadly disease can infect any organ system of the body. Extrapulmonary TB is reported in 14% of patients, with bony involvement in 1%-8% of the time. Concurrent pulmonary and osseous involvement happens in 50% of patients. The most commonly affected bone is the vertebra in 30%-50% of patients. The usual osseous involvements are on the major weight-bearing joints of the lower extremity like the hip and knee, followed by the foot, elbow and hand. The common sites involved in musculoskeletal TB include the spine (50%), pelvis (12%), hip and femur (10%), knee and tibia (10%), ribs (7%), ankle/shoulder (2%), elbow or wrist (2%) and multiple sites (3%).[2]

Tuberculous synovitis or arthritis of the knee has a characteristic monoarticular involvement and commonly affects the weight-bearing joints such as the knee and hip. The disease initially presents as synovitis leading to arthritis with demineralization, erosions and lastly joint destruction.[3] Early changes are seen through MRI. Joint effusion will show hyperintense signal on T2W, but debris, loose bodies and hemosiderin deposits can be seen as hypointense signals on both T1W and T2W.

The primary goals in the treatment of bone TB are eradicating the infection, limiting the deformity, maintaining joint mobility, reducing pain and discomfort. Most of the patients can be treated conservatively with chemotherapy, rest, and gradual remobilization. On the other hand, operative management includes arthrotomy, synovectomy, and curettage with bone grafting of the articular defect; curettage and bone grafting of extra-articular lesions; joint and bone resection; abscess drainage; arthrodesis; and amputation.[7]

The objective of this study was to determine the QoL of adult patients with TB arthropathy who underwent surgery at the USTH from January 2014 to December 2016. Furthermore, the secondary objectives were to assess the PCS score and MCS score of TB arthritis adult patients and present the following scales using the Tagalog SF-36 v2: a) Physical functioning; b) Role limitations due to physical health; c) Role limitations due to emotional problems; d) Energy/fatigue; e) Emotional well-being; f) Social functioning; g) Pain; h) General health. Moreover, the clinical profile and outcome of surgically treated adult patients with TB arthritis were looked into.

This is a descriptive cross-sectional study conducted over a period of 3 years among admitted adult patients in the USTH diagnosed and treated as TB arthritis. The study included all adult patients with TB arthritis who underwent surgery at the USTH from January 2014 to December 2016. The patients were identified throughout patient and in-patient records of the Department of Orthopedics from January 2014 to December 2016. Also, the diagnosis of TB arthritis was conferred with the final histopathology report and was reviewed at the records section of the pathology laboratory.

Once identified, the charts, records and imaging data were reviewed. Inclusion criteria for this study were adult Filipinos (>18 years old) who had been histologically diagnosed with TB arthritis in any part of the extremity, patients treated medically with anti-TB medications for at least 9 months, patients who were surgically managed at the USTH with at least 6 months follow-up after completion of treatment.

Patients were excluded from this study if no consent was given by the patient, if they were unable to answer the Tagalog SF – 36 v2 questionnaire and also patients with other bone and soft tissue conditions that may affect the function of the extremity (such as other arthropathies).

The scores of the 8 scales of the SF-36 (set to a metric of 0-100) including two norm-based summary scores (PCS and MCS) were computed. Independent t-test and one-way Analysis of variance (ANOVA) were used to compare the mean SF-36 scores by extremity affected and year of surgery, respectively. Significant ANOVA results were further analyzed. A p-value ≤0.05 was considered statistically significant.

A total of 15 TB arthritis patients underwent surgery in the USTH between January 2014 and December 2016—5 patients for each year. A slightly higher proportion of TB arthritis patients were male (Table 2). About half (6) of the patients had diabetes mellitus (DM), 27% (4) have a family history of TB and 13% (2) have a history of TB treatment (Figure 1). More than half of the patients (8) were affected in their lower extremities. One (1) patient was diagnosed with TB arthritis in both the upper and lower extremities (Figure 2). The majority (40%) were affected in the knee/tibia area (6), followed by the ankle, hand and wrist with two (2) pathologies, respectively. Other pathologies (1) include the shoulder and elbow. Only 1 patient had multiple sites—the knee, wrist and elbow (Figure 3). A majority of the patients had stage 2 (late) TB arthritis. Only 2 patients were diagnosed with stage 1 (early) (Figure 4). All patients underwent some form of debridement with or without arthrotomy or synovectomy.

Musculoskeletal manifestations are seen in 1%-3% of patients with tuberculosis.[1] In the past three years, the USTH has seen a few number of cases managed both surgically and medically.

The diagnosis of TB arthritis is delayed due to lack of awareness, insidious onset, lack of characteristic early radiographic findings and often lack of constitutional or pulmonary involvement. In the series of cases presented, most of the patients presented in our institution are in the late stages of disease that lead to some form of disability. Early-stage arthritis is considered to be the stage of synovitis and arthritis. This is characterized as periarticular demineralization, joint space widening due to effusion and mild subchondral erosion. Late-stage arthritis is considered as the stage of erosion and destruction. This is characterized as joint space narrowing, severe subchondral destruction and in some pathological subluxation and dislocation.[8] Tubercular arthritis is characteristically monoarticular and most commonly affects the spine and weight-bearing joints such as the knee, hip and ankle.[9] In our study, 14 out of 15 cases are presented as mono-articular type. Most of the pathologies were located at major weight-bearing areas such as the knee (6) and ankle joints (2).

The diagnosis of tuberculous arthritis is difficult because it can mimic an early mono-articular chronic inflammatory rheumatism, other granulomatous synovitis and pigmented villonodular synovitis.

All our cases had a bacteriological or histological confirmation after the diagnosis was suspected on the basis of chronic and destructive soft tissue or osteoarticular lesions. The diagnosis of TB arthritis is as challenging as the treatment. Still, the mainstay treatment remains anti-tuberculosis chemotherapy.[10]

Surgical procedures should be restricted to joints with severe cartilage destruction, joint deformity, large abscesses, multiple drug resistance or atypical mycobacteria.[11] Our operative indications depended on both clinical and radiological features. The study of Orillaza and Tacata showed that surgery can be done as a prognosticator and for preventive measures to improve function and further complications.[9] Hence, surgical management can be both diagnostic and therapeutic at the same time.

Looking into the details of items in the questionnaire allowed us a better evaluation in which aspects patients with TB arthritis were more affected. These may guide us in counseling patients on the functional aspects that are more likely to be impaired on their way to recovery even after the duration of treatment. On the other hand, patients treated surgically and medically have good QoL outcome scores. Moreover, it can be observed in our data that the highest mean score is exhibited by patients who underwent surgery in 2014 and lowest in patients who underwent surgery in 2016. This can be attributed to the longer time of recuperation.

All patients have good QoL scores after surgery and complete medical treatment as demonstrated by the SF-36 scores. TB arthritis can affect the physical and mental aspects of patients. No significant difference in mean scores by year were seen in all the scales of the SF-36. Although it can be observed that the highest mean score is exhibited by patients who underwent surgery in 2014 and the lowest in patients who underwent surgery in 2016, that can be attributed to the longer period of recuperation. Patients can return to their functional capacity but can have some residual physical impairment.

There are several limitations to this study. First, only a single-center review was done. Another limitation is the small number of patients. Due to the limited number of cases, only a few patients were selected to be included in the study. The present study also compared different sets of patients depending on the year of surgery. They suggest that future studies do a prospective cohort study or a multicenter study to collect more patients and increase the sample size to allow more in-depth analysis like for example factors affecting QoL.

Table 3. Mean SF-36 scores of patients in USTH with TB arthropathy by year of surgery