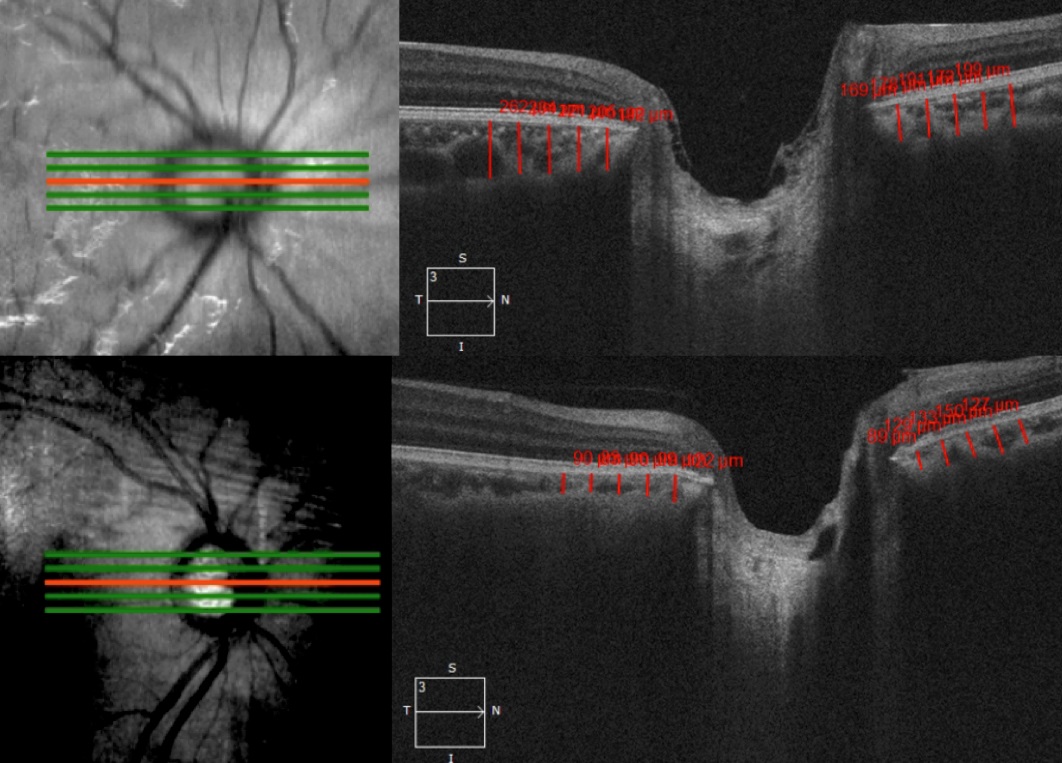 Glaucomatous optic neuropathy is described as death of retinal ganglion cells and glial cells that will eventually develop distinctive patterns of visual dysfunction measured by perimetry.

The diagnosis of a “glaucoma suspect” is made when patients have at least one clinical feature of the disease, including an elevated intraocular pressure (IOP), a suspicious optic nerve appearance, commonly referred to as “cupping,” a repeatable visual field abnormality consistent with optic nerve damage, or a strong family history of glaucomatous disease.[1]

The pathogenesis of glaucoma is not fully understood. Multiple factors have been identified with elevated IOP as one of the primary risk factors. However, there are patients who have IOP within the normal range and still develop glaucoma and also patients who have IOP above normal and do not develop the disease.

Disturbance in vascular autoregulation is also a pathogenic factor. Studies have identified reduced ocular perfusion as a risk factor for glaucoma prevalence, incidence and progression.[2] While the branches of the central retinal artery supply the surface retinal nerve fiber layer, the primary blood supply of the prelaminar and laminar portion of the optic nerve is principally derived from the choroid. This led to the hypothesis that disturbance in the choroidal blood flow could contribute to glaucomatous optic neuropathy.

Evidence shows mixed results regarding the relationship of choroidal thickness and glaucoma. Sigler hypothesized that chronic IOP elevation may lead to distention and thinning of the peripapillary choroid.[3] Sullivan-Mee postulated that the region of the choroid that should be under investigation is the one that provides blood supply to the optic nerve, the region directly adjacent to it, hence focusing on juxtapapillary choroidal thickness.[2]

Spectral Domain Optical Coherence Tomography (SD-OCT) allows for non-invasive in vivo evaluation of intraocular anatomy at the micrometer level with high reliability and reproducibility. The aim of this study is to use SD-OCT with enhanced depth imaging (EDI) to measure juxtapapillary choroidal thickness and correlate it with visual field results of glaucoma suspect patients.

This investigation is a cross-sectional study.

Criteria for eligibility were: age ≥18 years; refractive error ≤5 diopters as it is established that choroidal thickness is smaller in highly myopic eyes [4]; no media opacities, no history of corneal or glaucoma surgery; no previous diagnosis of glaucoma; and no visual field loss due to non-glaucomatous pathology (including retinal, optic nerve or visual pathway disorders). Subjects with uncomplicated cataract surgery at least three months prior to SD-OCT choroidal imaging were eligible.

One-way multivariate analysis of covariance (MANCOVA) was used in comparing the mean temporal and nasal choroidal thickness scores of the two groups. MANCOVA was utilized for two reasons: (1) the study has multiple dependent or outcome variables and (2) certain covariates (continuous-level confounders) were identified and can be statistically controlled. Multivariate analysis was used in order to compare the two dependent variables simultaneously instead of conducting two independent t-tests.

Data collection was done in 6 months’ time. A total of 175 eyes of glaucoma suspect patients from the outpatient department as well as from the private clinics of different ophthalmologists of the same institution had standard automated perimetry (SAP) with optimal near-point correction using the Humphrey Visual Field Analyzer II, 30-2 or 24-2 SITA-standard program at 31.5 apostilbs, Stimulus III (Carl Zeiss Meditec, Inc., Dublin, CA). Visual fields were required to meet the following reliability criteria: false positives and false negatives <33%; fixation losses <20%. Functional glaucomatous damage is established if the patient has an abnormal glaucoma hemifield test with three or more non-edge points in the pattern deviation plot with a p-value of <5% or 1 point with a p-value of <1% with associated visual field patterns characteristic of death of retinal nerve fiber related defects: altitudinal, arcuate, partial arcuate, nasal step and temporal wedge.[5] The visual fields were assessed as normal even if there are non-specific visual field defects if their mean deviation (MD) and pattern standard deviation (PSD) values were within 95% of the confidence interval and if their glaucoma hemifield test falls “within normal limits”.

SD-OCT imaging (Cirrus HD-OCT, Carl Zeiss Meditec, Inc., Dublin, CA) of the RNFL was done and in using EDI of the optic nerve, choroidal thickness was measured. To be included in the analysis, signal strength of the image has to be 5 or more. The patient is said to have structural damage if the RNFL thickness falls on the 1st to 5th percentile on the temporal–superior–nasal–inferior–temporal (TSNIT) graph and if there is blunting of its double hump appearance.

The HD 5 line raster scan was centered at the optic disc. The line bisecting the disc was selected. A single observer obtained the juxtapapillary choroidal thickness. It was measured using the Cirrus device caliper tool from the posterior edge of the retinal pigment epithelium to the choroid-sclera junction [6] in 5 points 250 um apart, nasally and temporally away from the disc (Figure 1).

The population was classified into two groups: those with structural or functional glaucomatous damage (Group 1) and those without (Group 2).

To compare choroidal thickness in glaucoma suspects, patients with structural or functional glaucomatous damage (n=68) were assigned to the first group, and those without damage (n=107) to the second group. The sample size of 175 eyes achieved a power of 0.9999 or 99.99% with an effect size of 0.1759 (Chart 2).

Table 3 shows the comparison of the temporal and nasal choroidal thickness scores (from 0 μm to 1,000 μm) between respondents with and without glaucomatous damage. On a multivariate level, the comparison using MANCOVA was not statistically significant (p=0.8892) even after controlling for the confounding effects of sex. Ideally, we no longer explore the univariate (per variable) comparison. However, for presentation purposes, the comparisons of 10 dependent variables are provided. All comparisons at different juxtapapillary locations were not statistically different.

The management of patients suspected with glaucoma can be difficult. On one hand, early treatment can be done to prevent irreversible glaucomatous optic neuropathy. On the other hand, if the patient does not have the disease, he may be started on unnecessary costly treatments and burdened with side effects. The most established risk calculator is based on data from the Ocular Hypertension Treatment Study and European Glaucoma Prevention Study.[7] Factors evaluated include: IOP, age, central corneal thickness, vertical cup-disc ratio and standard deviation pattern of the visual field. Still with all these factors, the accuracy of predicting the development of definitive glaucomatous damage in a suspect was only fair with the area under the receiver-operating curve of 0.68.[8] This is the reason why there is a need to identify other contributing factors.

OCT is a fast-evolving technology that allows non-invasive analysis of the posterior pole in vivo, thereby aiding in the prompt evaluation and management of ocular disease. Its advantage lies in its ability of segmentation, which is notably important in the diagnosis and management of glaucoma.[11] Its algorithms allow measurement of segments such as the retinal nerve fiber layer and the ability to compare it to previous examinations.

Swept source optical coherence tomography (SS-OCT) has an advantage over SD-OCT as it has software that automatically detects and measures the choroid. Akil used deep range imaging (DRI), a feature of SS-OCT, which automatically segments and measures the choroid to evaluate glaucomatous, pre-perimetric and non-glaucomatous eyes and found a significant correlation of RNFL thickness and peripapillary choroidal thickness in 1, 2, 5 and 6 clock hours of glaucomatous eyes.[18]

A limitation of this method of measurement is that it can be prone to variation as the choroid-sclera junction was manually set by the investigator. There is no fully automated software commercially available to measure this in SD-OCT unlike in SS-OCT.[19] A validation study on the measurement of choroidal thickness in SD-OCT is needed. Another limitation of the study is that only the nasal and temporal peripapillary choroid was measured. The researchers suggest developing a way to measure the superior and inferior peripapillary choroid, locations which are associated with glaucomatous RNFL loss.

Due to the cross-sectional study design, it was unlikely to reveal the impact of glaucomatous progression or conversion and its relation with choroidal thickness. Longitudinal studies are suggested for this purpose.

OCT angiography is an emerging modality to consider. It characterizes vascular information at various user-defined retinal layers as a vessel density map and quantitatively as vessel density.[20] The investigators suggest making use of this in evaluating the microvasculature of the optic nerve.

Glaucoma is a multi-faceted disease. Results show that from this present cohort of glaucoma suspect patients, juxtapapillary choroidal thickness is not correlated with structural and functional glaucomatous damage.

The researchers are not supported financially or any means by any organizations for the completion of the study. The researchers claim no conflicts of interest.