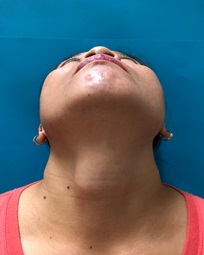 Thyroglossal duct cyst (TGDC) is the most commonly encountered midline and upper cervical mass in the pediatric population with no gender predilection [1-4] and the only true malignancy of the thyroglossal duct is squamous cell carcinoma.[5,6]

Although it is the most common congenital anomaly of the neck and approximately 7% of the general population have this condition [7-9], these patients can also have a rare form of malignancy of this tract, which is papillary carcinoma with cases accounting for only <1%.[1] Current literature on the management of these cases [1,4] is yet to have a consensus in definitive management due to different presentations on the diagnosis as seen in this case.

This case report shows that a Sistrunk procedure alone is also an adequate means for curative treatment.[1]

This is a case of a 43 year-old female with a chief complaint of anterior neck mass on clinic visit. History started 10 months prior, when the patient noted a 1x1x1 cm firm, non-tender, anterior neck mass. There were no accompanying symptoms of dyspnea, dysphagia, palpitations, easy fatigability, hoarseness, heat/cold intolerance and no weight loss or gain noted. The patient consulted a private physician where an ultrasound of the neck was requested, the results of which were unrecalled and the patient was lost to follow-up.(Figure 1A)

Interval history revealed asymptomatic progressive increase in mass size. Five months prior, with the increasing mass size, the patient went for another consult with another physician where a biopsy of the said mass was done which showed a colloid cyst. She was advised observation in the meantime; however, the more pronounced size of the neck mass led the patient to consult at the OPD clinic for further management. A thyroid function test was requested which yielded normal result. An ultrasound of the neck showed a superficial complex mass measuring 2.9x2.1x2.9 cm, 2-3 cm superior to the thyroid gland with no malignant features. The findings were consistent with TGDC, hence the patient was advised surgery.

Intraoperatively the mass was noted to be firm and unusually adherent to the surrounding strap muscles. The hyoid bone was normal looking with the superior part of the mass seemingly invading the inferior border of the hyoid. The hyoid bone was dissected from the surrounding structures and the anterior part removed along with the specimen to complete the Sistrunk procedure. The inferior part of the cyst was noted to be soft with minimal amber colored fluid inside. There was a 3-4 cm of separation of the TGDC from the isthmus of thyroid gland. There were no unusual masses noted within the thyroid gland upon inspection. The surgery was then completed and a Penrose drain was placed.(Figure 2)

The physical examination of these patients are usually equivocal and hence, differentiating a malignant from benign TGDC preoperatively is very difficult.[7,9] Most of the TGDC carcinoma cases show benign characteristics with minimal to nil information acquired through ancillary procedures. Physical findings like cervical lymphadenopathy and fixed hard mass should cause alarm for malignancy. In the case of our patient, physical examination from her first visit up until the preoperative assessment showed typical, benign characteristics of a TGDC with no findings suggestive of malignancy. The diagnosis of thyroglossal duct cyst carcinoma (TDCCa) needs a histological demonstration of the duct with associated respiratory epithelium, squamous epithelium or a combination of both.(Figure 3)

This is a rare case without a well-defined management and staging criteria. As such, it has been a cause of debates regarding the optimal management as well as extent of completeness of surgery. Similar cases of TGDCCa have usually been diagnosed postoperatively due to the acellular nature of the cyst contents on fine needle aspiration biopsy.[1,4] In the case of this patient, a Sistrunk procedure was performed based on the preoperative findings consistent for a benign tumor. Intraoperatively however, unexpectedly, a solid, fixed and firm mass adherent to the hyoid bone with infiltration to the surrounding strap muscles was seen. There was note of a 3-4 cm separation of the inferior border of the mass to the thyroid isthmus and thyroid gland.(Figure 2,4,5)

This case had typical benign preoperative clinical findings that conflicted with the suspiciously malignant intraoperative findings causing some challenges in management decisions. The thyroid gland was benign-looking on intraoperative inspection. The distance of the cyst from the gland was significant enough that it was not deemed necessary to remove the thyroid gland at that point in time. It is also worthy to note that on preoperative ultrasonography, the thyroid gland was relatively normal-looking with no heterogeneity on scan, with benign-looking lymph nodes and no thyroid lesions appreciated. Having taken all of this clinical information into consideration, a simple Sistrunk procedure was deemed enough.(Figure 2-5)

Papillary thyroid carcinoma of the TGDC is a rare form of carcinoma from a congenital benign anomaly. Flexibility and clear, open communication with the patient and their relatives are needed in preparation for these kinds or surgery. The management plans should be adequately discussed, especially in cases where there may be features highly suggestive of malignancy yet unproven preoperatively, and a deviation from the original plan for benign lesions may be converted to a more radical surgery as indicated by the intraoperative findings to assure complete eradication of the malignancy.

(B) On further scanning, clusters of atypical thyrocytes are seen having papillary formation

Figure 4: (A) Thyroglossal duct cyst with anterior segment of the hyoid bone with the cyst on the (B) inferior portion of the cyst. This structure shows invasion of the surrounding soft tissue(C) but not the skeletal muscles.

Figure 5: (A) Scanning micrograph of the identified lymph node on biopsy. (B) The lymph node shows metastasis of atypical thyrocytes.