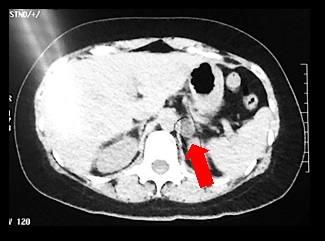 Hypertension is a serious public health problem that affects more than 1 billion patients worldwide.[1] Arterial hypertension of unknown origin or commonly known as primary or “essential” hypertension is seen in a majority of cases, about 85%, and is considered secondary in a small fraction of hypertensive patients, approximately 15%.[2]

The secondary causes of hypertension can be divided into renal causes, such as renal parenchymal or renovascular disease, and endocrine causes. There are at least 14 endocrine disorders for which hypertension may be the initial clinical presentation.[2] Primary aldosteronism (PA) is a common form of endocrine hypertension in which aldosterone production is inappropriate and at least partially autonomous of the renin-angiotensin system. PA is the most common cause of secondary hypertension and approximately 5–12% of all people with high BP have it.[3,4,5] A proper diagnosis of PA is very important for clinicians because it provides an opportunity to either cure hypertension or uses targeted pharmacotherapy and prevents complications such as renal failure and cardiac disease.[2,3] Aldosterone-producing adenoma (APA) and bilateral idiopathic hyperaldosteronism (IHA) are the most common subtypes of primary aldosteronism, approximately 30% and 60%, respectively.[2] APA is treated surgically and IHA is mainly managed medically.[2] This present case report is hinged on the fact that there is no local data and there is paucity of reported cases worldwide regarding BAH. This present case also exemplifies BAH being non-responsive to aldosterone receptor antagonist, yet surgically manageable through hormonal unloading.

Informed consent was taken voluntarily and done in accordance with the Data Privacy Act of 2012.

A 47-year-old woman was admitted due to elevated BP 150/90 mmHg. Nine years ago, she was diagnosed with uncontrolled blood pressure and started on three antihypertensive medications including amlodipine 10 mg/tab 1 tab OD, losartan 50 mg/tab 1 tab OD, hydrochlorothiazide 12.5 mg/tab 1 tab BID. She also had mild hypokalemia (K: 3.1 mmol/L, N.V. 3.7–5.0). No chest pain, no dyspnea, no congestive symptoms, no palpitations, no headache, and no sweating were noted; however, she had polyuria and polydipsia. Three years prior to admission, an MRI of the whole abdomen was done, which showed a well-defined oval-shaped solid nodule in the medial limb of the left adrenal 1.8x1.2 cm; right side notably normal. The patient was eventually referred to an endocrinologist who did the following work ups: urine metanephrines: negative, serum cortisol 1.2 mcg/dL after 1 mg dexamethasone suppression, plasma aldosterone 6.61 ng/dL, renin <0.1 ng/mL, ARR 66. The patient was assessed to have primary aldosteronism (PA) and a confirmatory test was done. The saline suppression test result was elevated at 12.70, which was compatible with the diagnosis. The patient was started on spironolactone 50 mg/tab 1 tab OD. At this time, she was advised surgery but opted to seek a second opinion with another endocrinologist. Two years prior to admission, bilateral adrenal vein sampling with ACTH stimulation test was done and the result showed BAH (cortisol-corrected aldosterone ratio pre-ACTH stimulation 1.29 and post ACTH 1.66). She was managed medically with spironolactone 100 mg/tab 1 tablet twice daily, but developed gastrointestinal upset and amenorrhea. She consulted another endocrinologist and spironolactone was shifted to eplerenone 50 mg/tab 1 tablet twice daily. Three months prior to admission, the patient had a severe headache and high BP with palpitations. She was admitted and repeat urine metanephrines done which still showed a negative result. Eplerenone was shifted back to spironolactone 100 mg/tab 1 tablet in the morning and 50 mg/tab 1 tablet in the afternoon. Computed tomography scan of the upper abdomen with contrast showed a 1.5x2.2 cm nodule on the left adrenal gland on pre-contrast with mild enhancement at 60 sec and rapid washout at 15 min delayed study. This is consistent with adrenal adenoma (Figure 1). The patient was advised to undergo unilateral adrenalectomy; hence admission.

Figure 1. CT scan of the whole abdomen with contrast (Red arrow points to the 1.5x2.2 cm nodule on the left adrenal gland)

She had warm, moist skin, no moon facies, no facial plethora, pink palpebral conjunctivae, anicteric sclerae, no periorbital edema; no exophthalmos, no lid lag, and no retraction. Her pupils were equally reactive to light. There was no hirsutism. She had non-distended neck veins, symmetrical chest expansion, no galactorrhea, no breast mass nor nipple discharge, no retractions, and no crackles or wheezes. She had adynamic precordium; apex beat was at the 5th LICS MCL, no heaves, lifts or thrills, with loud S1 followed by soft S2 at the apex, loud S2 followed by soft S1 at the base. No cardiac murmurs appreciated. Her abdomen was protuberant, flabby with whitish abdominal striae. She had a soft and non-tender abdomen; the liver span was 8 cm, right MCL; Traube’s space was obliterated. There were no hand tremors, no joint swelling. The pulses were full and equal with normal deep tendon reflexes ++ on all extremities.

Postoperatively, the serum K was normal at 3.9 mmol/L. The patient was asymptomatic for the rest of the hospital stay. Her BP ranged from 100–120/60–80 mmHg. The patient was discharged on the third hospital day without the need for spironolactone or antihypertensive medications. The left adrenal gland histopathology showed loose clusters of cells with round to oval, small, smooth, benign-appearing nuclei and abundant foamy, vacuolated cytoplasm compatible with adrenal adenoma (Figure 4).

Figure 4. Histopathology of the left adrenal gland (distinct cell borders with large cells having different cytoplasm content and with a variation of nuclear size)

Postoperatively, the patient was normotensive (BP 110/70 mmHg) and normokalemic (4.0 mmol/L). On follow up after one month without taking any antihypertensive medications and spironolactone, she still maintained BP and normal K level (3.8 mmol/L). On follow up after two months, the patient had episodes of dizziness, BP of 160/90 and K 4.1 mmol/L, spironolactone 25 mg tab and amlodipine 5 mg tab once daily was resumed. There was no recurrence of symptoms and her BP eventually normalized with a lower dose of spironolactone and antihypertensive medication.

In the study of Doroin,[9] they found that the clinical profile of patients with PA in a tertiary hospital showed weakness of extremities (89%), headache (11%), and the median baseline duration of hypertension was 48 months.

Autonomous aldosterone secretion by the adrenal glands results in hypokalemia, sodium reabsorption, and fluid retention. The alarming forthcoming trouble in this situation is that prolonged exposure to high aldosterone concentrations has a deleterious effect on cardiovascular tissues and is associated with target organ damage.[10,11,12]

The study of Savard [11] found that the frequency of CV events was significantly higher in patients with PA than in properly matched controls with essential hypertension. A history of atrial fibrillation, myocardial infarction, coronary artery disease, or heart failure was more frequently found at the first visit in patients with PA. The culprit to this is probably secondary to the stress, endothelial dysfunction, inflammation, remodeling, hypertrophy, and fibrosis brought about by the high secretion of aldosterone.[12,13] These mechanisms lead to structural abnormalities, including an increase in arterial wall stiffness and carotid intima media thickness, the formation of carotid plaques, and myocardial fibrosis.[13,16]

For BAH, it has been emphasized that the treatment of choice is medical management; however, treatment with spironolactone has some adverse effects such as gynecomastia in males and menstrual irregularity in females. Moreover, BP control may not be completely achieved with spironolactone or eplerenone;[17] therefore, unilateral adrenalectomy is a treatment option, such as in the case of our patient.

This surgical option offered to a select number of patients is called systemic unloading. It refers to a process of reducing the load of hormonal secretion from an autonomously functioning gland. In cases of IAH who failed medical therapy, unilateral adrenalectomy aims to reduce the production of aldosterone and subsequently, the effect of aldosterone excess by the autonomously functioning adrenal gland.

The study of Sukor et al.[17] in 2009 examined the role of unilateral adrenalectomy in patients with bilateral PA in a single center over 22 years. Among the 40 patients included, the most common rationale for surgery was failed medical therapy, in the form of intolerant adverse effects of mineralocorticoid antagonists or uncontrolled hypertension in spite of maximizing antihypertensive medication. The adrenal chosen for removal was on either a finding of higher adrenal venous aldosterone/cortisol ratio on AVS or an adrenal nodule on CT scan of the abdomen, such as in our patient. On follow up, these patients were normokalemic and normotensive requiring less antihypertensive medication.[17]

The strength of this study lies in the good judgement of the medical team to offer surgery as a treatment option. The limitation of this study is the short followup on the case at the time of writing this case. Due to the underdiagnosed prevalence of secondary hypertension, only this case has been reported in the country.

In conclusion, hormonal unloading through removal of the dominant adrenal in BAH leads to improved quality of life and better control of BP on a lower dose of medication, as exemplified in this case report.

Written informed consent was obtained from the patient voluntarily for writing and publication of this case report and the accompanying images (CT scan images and histopathology slide images). All the information regarding the patient was kept in strict confidence and patient identifiers (such as name, geographical location, date of birth, contact number, etc.) The patient’s anonymity and confidentiality is protected by non-disclosure of any personal information that will identify the individual when the study is published or presented. A breach of confidentiality may occur if the information is used in any other way.