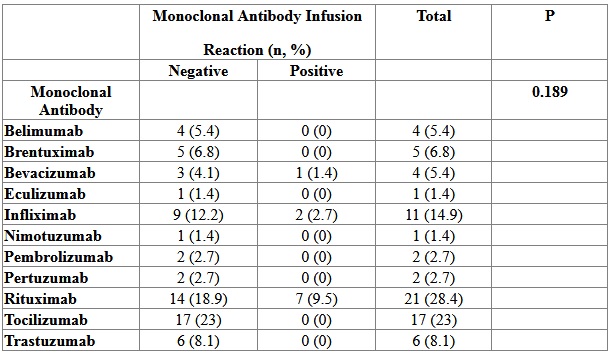 Monoclonal antibodies are developed to target a particular antigen expressed by the tumor cells, enhancing antibody-dependent cytotoxicity and tumor killing. Knowledge not only of their mechanism of action but also their their adverse event profile is tantamount. Generally, infusion of these drugs in the outpatient setting is well-tolerated; however, there are some instances when patients develop adverse reactions. One of the distinctive events is the potential for non-allergic and allergic infusion reactions caused by cytokine release. More commonly these infusion reactions are not predictable. What initially appears to be a minor reaction can eventually turn out to be deleterious. So, the safety of patients receiving therapy is of utmost importance.

In general, monoclonal antibodies are well tolerated. However, there are instances when acute reactions follow the infusion of these monoclonal antibodies. These may present as fever, tremor, flushing, dyspnea, itching, and changes in heart rate and blood pressure [3].

These infusion reactions differ in severity. The reactions range from headache, mild gastrointestinal symptoms such as diarrhea, transient rash and itching to severe cytopenias, cardiac toxicity, anaphylaxis, exfoliative dermatitis and rarely life-threatening bullous toxidermias [10]. The widely accepted National Cancer Institute has formulated a classification for different types of adverse reactions associated with monoclonal antibodies. These are grade 0-5 in severity ranging from mild to severe symptoms [11].

Due to documented reactions, the administration of monoclonal antibodies has to be monitored closely. Certainly not a guarantee, pre-infusion medications such as antipyretics, antihistamines and corticosteroids are being used before the administration of monoclonal antibodies to decrease the likelihood of adverse reactions. Reactions of cytokine release may be managed by short-term cessation of drug infusion, administration of H1/H2 inhibitors and restarting the infusion at a slower rate [6]. In rituximab, administration of the medication was also practiced to be given slowly to reduce infusion reactions. History of previous reactions should also be reviewed so as to alert caregivers of future risk of adverse effects during infusion [7].

The USTH-BCI and JBC are ambulatory units where these drugs are administered in an outpatient setting. The most common monoclonal antibodies infused in these units are rituximab, infliximab, bevacizumab, tocilizumab, belimumab, brentuximab, pembrolizumab, trastuzumab, pertuzumab, nimotuzumab and eculizumab. As part of pharmacovigilance and patient safety advocacy, the researchers would like to know the prevalence, characterize the severity of infusion reaction and describe the outcome of management given to these patients.

This is a two-year retrospective study done in the USTH, a tertiary teaching hospital. A chart review of patients seen at the BCI and JBC was done. Patients who received monoclonal antibodies namely rituximab, infliximab, bevacizumab, tocilizumab, belimumab, brentuximab, pembrolizumab, trastuzumab, pertuzumab, nimotuzumab and eculizumab from July 2015 to July 2017 were included in the study. The research study proposal was approved by the UST Hospital-Institutional Review Board prior to any study-related events.

Infusion reactions were classified based on the Modified National Cancer Institute Common Terminology Criteria for Adverse Events Scale Version 3. This is a widely accepted standard set of terminologies throughout the oncology community as the uniform classification and severity grading scale for adverse events in cancer therapy clinical trials and other oncology settings. The prevalence rate will be computed in this study.

A total of 74 patients were included in the study, all of whom receivedat least 2 cycles of monoclonal antibody from July 2015 to July 2017 at the outpatient infusion units of the USTH. Among the study population, 10 patients developed infusion reaction which accounted for a calculated prevalence of 14%.

Table 1. Demographic data of patients receiving monoclonal antibody in the USTH series from July 2015 to July 2017

Table 1 presents the demographic data of the study population. Nineteen patients (25.7%) were in the 61 to 70 years age group, accounting for the majority of the population. The median age was 53 years. There were 48 (64.9%) females. The most common indication for monoclonal antibody infusion among the cohort was rheumatoid arthritis (21, 28.4%).

The researchers found no significant association between age, gender and diagnosis with the occurrence of infusion reaction. (p value=0.797, 0.493 and 0.359; respectively).

Table 2. Medications given prior to monoclonal antibody infusion in present USTH series

Table 3. Number and percentage of patients with and without infusion reaction according to monoclonal antibody received in the present USTH series

Table 3 shows the monoclonal antibodies administered to the study population. Twenty-one patients (28.4%) received rituximab, which accounts for the majority of the population. It was also the drug where most of the infusion reaction occurred in 7 patients (9.5%). This was followed by infliximab, accounting for a total of 11 patients (14.9%) infused and among these, 2 patients (2.7%) developed infusion reaction.

Table 4. Number and percentage of grading of monoclonal antibody infusion reaction present in the USTH series

Table 4 classified patients according to grade of infusion reaction. In this study, it was found that 90% of the infusion reactions were grade 2 based on the Modified NCTCAE Ver 3. These patients developed chills, erythema, wheals and nausea which were immediately relieved after receiving symptomatic treatment. Only one patient who received rituximab developed a grade 3 reaction in which the patient developed wheezes and dyspnea which were managed adequately.

Table 5. Number and percentage of monoclonal antibody infusion reaction according to the number of cycles received in the present USTH series

Table 5 notes the number of cycles when the infusion reaction manifested. Most patients developed adverse events during the first infusion (60%).

Table 6. Number and percentage of monoclonal antibody infusion reaction according to time of onset

Table 6 shows the time that infusion reaction symptoms occurred. Forty percent of reactions occurred during the first 2 hours of infusion. In this study, the onset of reaction to monoclonal antibodies was found to have a 2-hour meantime. This had a standard deviation of 1.23.

The salient finding in this present two-year study derived from a single-center university hospital ambulatory care setting, is the occurrence of a 14% prevalence of infusion reactions for those 74 patients administered with monoclonal antibodies in the oncologic and rheumatologic specialized services.

A majority of the patients were females in the older population, however, there were no associations with the onset of infusion reactions to age, sex and diagnosis. These present data were notably consistent with those published from elsewhere [12].

In addition, it was found that most patients’ premedications included paracetamol, diphenhydramine and corticosteroids. The data obtained in the study were seen to be consistent with other investigations where the most common premedications generally provided to patients were antihistamines and paracetamol [17]. Whilst found in this present study that a majority of patients had a grade 2 severity of reaction (eg, erythema, headache and chills), another local study also showed that 4 out of 5 patients taking rituximab developed grade 2 infusion reactions [21]. From elsewhere studies, grade 2 reactions were also more common [22,23] though some highlighted that grade 3 or 4 hypersensitivity reaction also occurred [24,25]. Coherent from elsewhere studies too [2,3], the timing of occurrence of infusion reaction in this study appears to be within 120 minutes post infusion, though some may be delayed up to 24 hours [2].

In this present study, most of the infusion reactions occurred during the first cycle of infusion, as was noted in another local study [21], and from another series [3]. Along with these, Choquette and colleagues [26] found that the incidence then varied from 1.8% to 3.2% between infusion numbers two and eight. Fewer than 1% developed infusion related reaction on the 8th cycle of rituximab treatment in a study by Vogel et al.[7]. Mild to moderate infusion reactions can be controlled by administration of supportive therapy or a temporary discontinuation of infusion [3].

The researcher recommends further studies regarding infusion reaction to include any comorbidities of the patient such as a history of allergy to account for the possibility of this risk factor in the development of infusion reaction. Furthermore, we recommend improvement in the documentation of the occurrence of infusion reactions, presentation, vital signs and physical examination of patients before, during and after infusion.