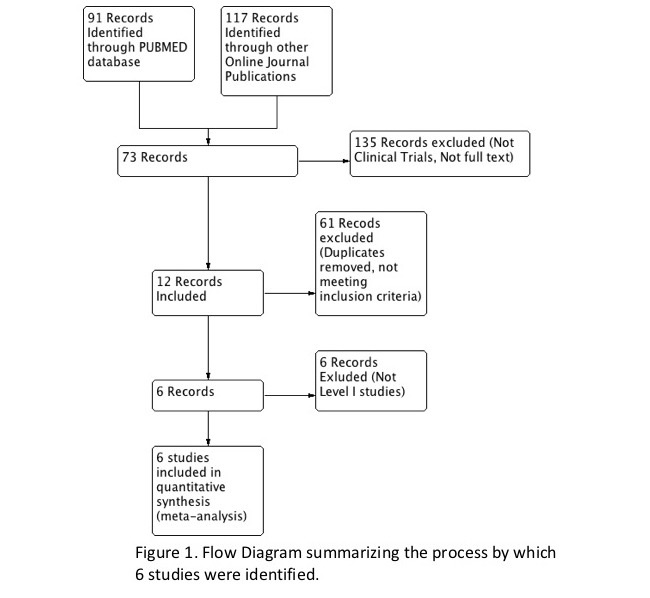 Arthroscopic rotator cuff repair has been widely used to manage full-thickness tears in rotator cuff muscles as it is associated with less pain and better functional outcomes in the early recovery period [1]. Despite advances in the fixation technique, tendon to bone healing still remains unpredictable. A high re-tear rate ranging from 10% to 57% has been observed from rotator cuff tear sizes ranging from <2 to >8 cm2 after arthroscopic repair [2].

Platelet-rich plasma (PRP) is a refined product of autologous blood with a platelet concentration greater than that of whole blood [3]. Several different commercial preparation kits are available in the market but basically, autologous blood of about 20-30 mL is extracted from the patient after which the blood is centrifuged for about 5 to 7 minutes, the serum plasma separated using another syringe and injected into the affected area [5].

Platelets are a source of high concentrations of several growth factors that are able to stimulate cell proliferation and provide a temporary matrix that fills the defect sites and serves as a matrix for cell migration and tissue remodeling [4]. It is rich in biologic factors (growth factors, cytokines, proteins, cellular components) essential for the body’s response to injury [3]. Hence, PRP can play a vital role in the biologic augmentation of tissue repair.

Various randomized controlled trials exploring the role of PRP in the augmentation of arthroscopically repaired rotator cuff muscles show mixed outcomes. There were two published meta-analyses done by Zhao J et.al. [4] and Cai Y et. al. [9] using level 1 and 2 type of evidences during the years 2011 to 2014 [4, 9]. Both studies showed no significant difference between patients with and without PRP supplementation after arthroscopic repair of rotator cuff muscle. In contrast to recently published studies, one meta-analysis conducted by Warth et al. [11] showed significant reduction in re-tear rates after PRP supplementation [11]. Two recent level 1 evidences, not included in those published meta-analysis showed significant reduction of re-tear rates after PRP supplementation [8,10]. As a result, there is a conflict in the efficacy whether PRP has a role in augmentation of arthroscopically repaired rotator cuff muscles [4,6,7,8,9,10,11].

A. Search Methods and Inclusion Criteria

A structural search was done using the PubMed, The Cochrane Library, Google Scholar and EMBASE databases starting from the year 2012 to 2018. Search terms used include: “Platelet-Rich Plasma AND Rotator Cuff Repair”. Furthermore, we searched the following journal contents in the past 3 years for randomized controlled trials: Arthroscopy: The Journal of Arthroscopic and Related Surgery, The American Journal of Sports Medicine, The Journal of Bone and Joint Surgery, The Bone and Joint Journal, Clinical Orthopaedics and Related Research, and the Journal of Shoulder and Elbow Surgery [4]. Local publications and electronic databases were also utilized so as to provide a thorough literature review. Unpublished gray literature was also reviewed through consultation with the research adviser.

Only level 1 randomized, controlled trials with full texts available were considered for this review as this type of study gave high quality data with the least bias. Available literature included have the following: (1) a target population of full-thickness rotator cuff tears requiring arthroscopic repair; (2) study designs comparing the outcomes of arthroscopic rotator cuff surgery with or without the use of PRP; (3) a minimum of 12-month follow-up; and (4) one or more outcomes of interest postoperatively (eg, re-tear rate, shoulder score and complications) [4].

B. Data Collection and Analysis

Two authors independently scanned the records retrieved from the searches and excluded studies which did not meet the inclusion criteria. In cases of disagreement between the two authors discussion with the research adviser to resolve conflicts was done. All studies that met the criteria were subjected to assessment of methodological quality. Those with poor methodological quality were not considered in the review.

Two authors independently extracted details and data and recorded them using the Cochrane Collaboration Data Extraction Template. The disagreement between the two authors was resolved by a discussion with the research adviser. The primary outcome measure of interest was the structural outcome which was expressed as re-tear rate. Secondary outcome measures of interest include the clinical outcomes namely: pain expressed as VAS and functional outcomes grade using various shoulder scores.

Methodological quality was assessed by the two authors. A detailed explanation of the randomization and blinding process was stated in the study designs for considered trials. A clearly stated follow-up period and low dropout rate of less than 20% was present in the methodology for considered trials. Studies which met all four criteria with good methodological quality were considered for this review.

Both clinical heterogeneity (eg, differences among patients, interventions and outcomes) and statistical heterogeneity (variation between trials in the underlying treatment effects being evaluated) were assessed in this study. To establish consistency in the study results, statistical heterogeneity between studies was tested using a standard I-square test. The I2 estimate examines the percentage of total variation across studies resulting from heterogeneity rather than by chance. According to the Cochrane Handbook, heterogeneity is considered not important between 0% and 40%, moderate between 30% and 60%, substantial between 50% and 90%, and considerable between 75% and 100%. Therefore, an I2 of less than 60% was accepted in this meta-analysis, and a random-effects model was used. The test for significance was two-tailed and p-value of <0.05 was deemed significant.

A thorough risk-of-bias assessment was undertaken to identify factors that may alter the results of this analysis. Two authors independently evaluated each included study and documented their potential for selection bias, performance bias, detection bias, attrition bias and reporting bias using the Cochrane tool for assessing the risk of bias in randomized trials.

The Review Manager 5.3 software program provided by The Cochrane Collaboration was used for graphic representation of the pooled data. Continuous data was measured as mean differences with 95% CIs. In addition, only outcomes reported by at least four or more studies were pooled to ensure good validity and high quality of pooled results because less than four references would create an excessive opportunity for bias [4].

This meta-analysis was conducted according to the guidelines of Preferred Reporting Items for Systematic Review and Meta-Analysis (PRISMA).

Two hundred eight titles were initially found. Ninety-one records were pooled using the PUBMED database while 117 records were identified from different online publication journals. Figure 1 shows the flow diagram outlining the study selection process. Six level 1 randomized controlled trials were eligible for the study. Two of the six were made by the same author but was done at two separate time periods.

Figures 2 and 3 summarize the risk of bias per study. The risk of selection bias was found to be low as only randomized studies were considered. Performance bias was likewise low since blinding of both the subjects and assessors were done in a majority of studies. Attrition bias was somewhat unclear since almost all studies did not mention an intention to treat analysis, although most of the included dropout rates were less than 10%. Publication bias was found to be low for all outcomes based on visual examination of funnel plots (appendices A, B, C).

Figure 5 shows the forest plot for pain scale using VAS after 12 months' follow-up. Five out of 6 studies were included in the analysis. The group with PRP showed a decrease in pain scale measured using VAS as compared to the group without PRP. The difference was significant (mean difference, -0.14; 95% CI, -0.23, -0.05). The test for heterogeneity was acceptable (I2=4%).

The results of this meta-analysis showed the efficacy of PRP as an augmenting biologic agent for patients who underwent arthroscopically repaired rotator cuff muscle. In contrast to previously reported meta-analyses [4,1], PRP as an augmenting agent reduces the re-tear rates, reduces the pain one year after the operation and improves the functional outcome of patients who underwent arthroscopic repair of rotator cuff muscles using the Constant-Murley Scale.

Clinical outcomes investigated in this meta-analysis were the pain scale measured using VAS and the Constant-Murley score. Only one previous meta-analysis investigated the effect of PRP in terms of decreasing the pain scale of patients after arthroscopic rotator cuff repair, it showed no significant difference [11]. The difference in results can be explained by the previous meta-analysis included level II studies. Two other meta-analyses revealed no significant difference in Constant-Murley Scores after 1 year of follow-up with the use of PRP for augmentation of arthroscopically repaired rotator cuff [4,9,11]. The conflicting results from this meta-analysis may be attributed to two factors. The studies conducted by Warth et.al. [11] and Zhao et.al. [4] included 1 level II study which may be a source of skewed results [4,11]. Also, the study done by Cai et.al. [9] has a relatively small sample size as compared to this meta-analysis.

Although favorable results were seen in this meta-analysis, it is not without limitations. First, the decision to include only level I studies to increase the power of our analysis may have induced reporting bias to the results as seen in the risk of bias assessment. Second, although the clinical outcomes can be measured objectively using VAS and the Constant-Murley score, they are still subjective in nature and the results are still at risk of reporting bias.

PRP as a biologic augmenter for repair has a role in the treatment of rotator cuff tear. It can decrease the re-tear rates, reduce pain scales and improve the functional shoulder scores in terms of the Constant-Murley Score. One of the limitations of this study is the possibility of reporting bias as only level 1 studies were included. Another limitation identified is the small sample size of the total study population. A study utilizing more randomized controlled trials would be better in order to determine the magnitude of its treatment effect.