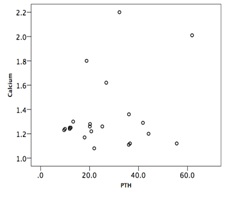 Multiple myeloma (MM) is an abnormal proliferation of plasma cells in the bone marrow. The clinical manifestation is variable, which can range from being asymptomatic to multi-organ involvement. This plasma cell malignancy affects mostly the kidneys and the skeletal system causing renal insufficiency, hypercalcemia, hyperviscosity and bone disease. Skeletal pathology in MM is characterized by generalized bone loss which can present as bone pain, lytic bone lesions or pathologic fractures. These result from increased osteoclast activity and reduced osteoblast function [1,2,3] causing increased bone resorption and decreased bone formation.

Bone health, in general, is maintained by the balance of the following elements: calcium, Vitamin D and parathyroid hormone. Vitamin D is the most important regulator of calcium homeostasis and osteoclast-mediated bone resorption. Hypovitaminosis D adversely affects calcium metabolism, osteoblastic activity, matrix ossification, bone remodeling and bone density [4]. Other consequences of Vitamin D deficiency are secondary hyperparathyroidism and bone loss leading to osteoporosis and fractures, mineralization defects, and muscle weakness causing falls and subsequently leading to more fractures [5]. Incidence of Vitamin D deficiency and insufficiency among MM patients is high [6]. This deficiency can cause generalized musculoskeletal pain and increase risks of fall [7], and hence may create further debilitating problems in this group of patients. In the Philippines, there is no data on the incidence or prevalence of Vitamin D deficiency among MM patients. This study was conducted to determine the status of Vitamin D among this subset of patients from University of Santo Tomas Hospital (USTH).

This is a prospective, cross-sectional study which included patients who were 18 years old and above, male or female, diagnosed with MM at the USTH, with or without treatment. Excluded in the study were those with Vitamin D and calcium supplementation. Written consent was signed by all subjects after thoroughly explaining the study to them. After signing a USTH-Institutional Review Board approved informed consent, subjects were instructed to fast for 8-10 hours prior to blood extraction. The following blood tests were requested: Vitamin D assay, intact parathyroid hormone and ionized calcium. The laboratory tests were done at the USTH laboratory. Specimen acquisition and handling were in accordance with the strict laboratory practice of the USTH clinical pathology laboratory. Results were given to the patient, attending physician and investigator for data collection, recording and analysis.

Meanwhile, it was evident that gender is associated (p=0.048) with the level of Vitamin D, indicating that males are 16.2 times [95% CI: 1.1 to 1008.4] more likely to have vitamin D deficiency as compared to those with insufficient Vitamin D. More male MM patients are suffering from hypovitaminosis D (80%; deficient and insufficient patients combined), compared to their female counterparts (66.7%).

MM remains to be an incurable plasma cell malignancy despite the advent of newer pharmacological treatment modalities [8]. Renal insufficiency and osteolytic bone disorders are among the systemic complications of this disease. Hypercalcemia results from increased bone resorption leading to skeletal-related events like pathologic fractures. The cornerstone in the treatment of high calcium levels among MM patients includes hydration and initiation of bisphosphonates [9].

The major cause of Vitamin D deficiency is lack of sun exposure. It is more prevalent in places with winter season making ultraviolet light (UV) unavailable for the skin to manufacture Vitamin D [11]. In tropical countries like the Philippines, hypovitaminosis D was noted to be common among office workers who stay indoors most of the day. The habitual wearing of long-sleeved clothing and slacks or pants, using too much sunscreen and lack of Vitamin D-rich foods in the diet are all contributory to having Vitamin D deficiency [12].

Studies have proven that there is a high incidence of Vitamin D deficiency among MM patients [6,7]. More importantly, Ng et al. [13] stated that hypovitaminosis D may portend poorer disease outcomes in patients with MM. A study done by Aribi et al. [14] in Algeria concluded that Vitamin D could be considered as an effective prognostic factor and treatment of MM, especially in patients with monoclonal IgG kappa immunoglobulin. One case study reported a 63-year-old MM patient who had Vitamin D deficiency and highlighted that Vitamin D deficiency can cause generalized musculoskeletal pain and increase risks of fall [8]. Maier et al . [15] also found out that there is widespread and alarming rate of hypovitaminosis D among patients with metastatic bone disease and MM. In that same study, it was concluded that it is important to assess Vitamin D levels among these subsets of patients.

Table 2 compiles the demographics and serum profile of MM patients included in the study. The mean age (p=0.069), PTH (p=0.062), ionized calcium (p=0.188), globulin (p=0.269) and TP (p=0.403) of the three groups of patients did not differ. However, more male MM patients are suffering from hypovitaminosis D (80%; deficient and insufficient patients combined) compared to their female counterparts (66.7%). This individual variability of 25(OH)D levels may be due to differences in sunshine exposure, clothing style, skin pigmentation and thickness, age and weight [4].

Serum calcium level regulates PTH secretion via negative feedback through the parathyroid calcium-sensing receptor (CASR) [16]. Decreased calcium levels stimulate PTH release. However, this PTH and calcium relationship was not seen in this study (r = 0.259, p=0.244). An elevated PTH value with normal serum calcium may not necessarily indicate primary hyperparathyroidism. It is possible that the elevation in PTH is due to secondary causes, the most likely being Vitamin D deficiency [16]. The levels of PTH are significantly associated (p=0.011) with their levels of Vitamin D, which implies that patients with insufficient levels of Vitamin D are 97% less likely [OR = 0.03, 95% CI: 0.00 to 0.74] to have decreased PTH compared to those with normal levels of Vitamin D. Patients with hypovitaminosis D are therefore more prone to having secondary hyperparathyroidism, which can further cause mineralization problems and bone loss, making MM patients more susceptible to pathologic fractures.

There was no significant correlation between Vitamin D status and performance status (ECOG score). This could be due to the differences in skeletal-related events experienced by the subjects. Some presented with bone pain without fractures, while those with fractures had varied sites of skeletal involvement.

This study proved that there is a high prevalence of Vitamin D deficiency among MM which matched previous reports by Badros et al. and Laroche et al [17,18]. Our data showed that more male MM patients are suffering from hypovitaminosis D (80%; deficient and insufficient patients combined), compared to their female counterparts (66.7%). These Vitamin D-deficient subjects are more likely to have secondary hyperparathyroidism. It is recommended that MM patients should be screened for possible hypovitaminosis D and prompt correction is necessary to avoid further bone loss. The International Myeloma Working Group recommends routine supplementation with calcium and Vitamin D among MM patients receiving bisphosphonate therapy [8]. In a study done by Hospital for Special Surgery in New York, they demonstrated that maintaining a circulating Vitamin D level above 33 ng/mL is associated with more favorable outcome with bisphosphonate therapy among patients with osteoporosis and low mineral density [19]. We recommend that a study be conducted among MM patients to determine if maintaining such a level will also optimize the effects of bisphosphonate in this subset of patients.