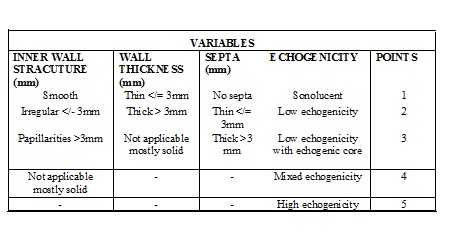 Background: Ovarian cancer is the second most common gynecologic cancer worldwide and are usually diagnosed in advanced stages where prognosis is very poor. Ultrasound has been widely used to screen and differentiate benign and malignant ovarian neoplasm. There are several ultrasound scoring system designed to aid in the diagnosis, however, there is still no standard method accepted for screening of ovarian cancer.

Objective: To compare the accuracy of SASSONE Scoring and ADNEX Model in differentiating benign and malignant ovarian neoplasm in the University of Santo Tomas Hospital.

Methodology: Sixty-eight women who presented with an ovarian neoplasm by history and physical examination were recruited from January to October 2017. Ultrasound was requested to further characterize the mass.

Sassone scoring and ADNEX Model were applied and computed based on the sonologic findings to differentiate whether the ovarian neoplasm was benign or malignant. The gold standard was the histopathologic examination of the mass after surgery.

Conclusion: There is no significant difference in using SASSONE and ADNEX model in differentiating benign and malignant ovarian neoplasm prior to surgery. Both may be used as an ultrasound scoring system for predicting ovarian malignancy. However, in cases of suspicious tumors, ADNEX model is more useful in discriminating the type and stage of malignancy.