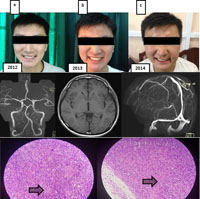 Sarcoidosis is a rare, often misdiagnosed, inflammatory multisystem disorder of unknown etiology with worldwide distribution. (1,2) Neurosarcoidosis commonly affects the cranial nerves, hypothalamus, and pituitary gland but also involves the meninges, parenchyma, brainstem and spinal cord. The 7th cranial nerve is the most commonly affected cranial nerve. Histopathologic finding of non-caseating granulomatous infiltration of the meninges and underlying parenchyma is most frequently seen at the base of the brain. (2-4) The process is either subacute or chronic in nature, mimicking other granulomatous lesions and neoplasms. When the nervous system is involved as it is in about 5-13% of cases, neurosarcoidosis can occur either in isolation or along with other features of systemic sarcoidosis. (5,6)  In a review by Lacomis (6), the mean age of onset is from 33 to 41 years. Women are more commonly affected. Neurologic manifestations usually occur within the first two years of illness.

A 26-year-old Chinese-Filipino male consulted because of inflammation of the left orbital area accompanied by blurring of vision of both eyes. Symptoms progressed leading to puffiness and swelling over the left orbital area which progressively increased in size leading to difficulty closing his eyes. This was accompanied by diplopia and dizziness. One year later, nodular skin lesions started to appear over his lip, cheeks and forehead. Upon examination, there were unremarkable neurologic findings except for the bilateral peripheral facial palsy, manifested as weakness of orbicularis oculi muscles, difficulty closing his eyes and facial asymmetry, noticeable more on the left (Figure 1).

A diagnosis of neurosarcoidosis was considered due to the presence of bifacial neuropathy with other cranial nerve symptoms such as diplopia, blurring of vision and dizziness with lymphadenopathies in chest CT Scan (Figure 3).

During admission, CSF analysis had normal pressure, cellularity, protein and sugar. Bacterial, viral and fungal panels were not yielding. CSF determination of oligoclonal bands, aquaporin-4 antibodies and protein immuno-electrophoresis were unyielding too. The patient was admitted and started on methylprednisolone pulse therapy at 1gm/day for 5days. Oral methylprednisolone was continued in an outpatient basis, initially at 16mg/tab 2 tabs twice a day, with signs of improvements after. Two months post steroid pulse treatment and into oral steroid therapy, increase in strength of bilateral facial muscles were noted when the patient could resist passive eye opening. Eventually oral steroids were tapered and discontinued. He had a recurrence of the same symptoms such as left facial asymmetry, dizziness, diplopia and swelling of the right eye. Oral steroids were resumed and a steroid sparing agent (Azathioprine 50mg/tab once daily) was added to the treatment. Symptoms once again resolved and trial of tapering steroids were once again performed.

When off steroids, new symptoms recurred such as weakness of finger flexors of the right hand and new nodules on the face (cheeks, eyelid, nose). Oral methylprednisolone, at 16mg/tab 2 tabs once a day, was resumed. Biopsy of the upper and lower eyelid nodules was done and histopathology showed non caseating chronic granulomatous inflammation. (Figure 4)

Our patient presented mainly with bifacial neuropathy also with other cranial nerve involvements likely cranial nerves II, III, IV and VI with unremarkable neuroimaging and CSF analysis but with lymphadenopathies on chest CT Scan and non-caseating granulomatous features in histopathology of eyelid nodules. There was remarkable steroid response which when tapered and discontinued led to occurrence of bifacial neuropathy and other cranial nerve involvement. Patient was too fearful to discontinue oral steroids so he is currently maintained on methylprednisolone 16mg/tab 1 tab and azathioprine 50mg/tab 1 tab daily.

A published classification to the diagnosis of neurosarcoidosis would be as follows (1):

Using the criteria (1), our patient falls under definite diagnosis of neurosarcoidosis.

The most commonly involved cranial nerve is the facial nerve (CN 7). (1,2,5) If a patient presents with bilateral cranial nerve palsy, neurosarcoidosis should be strongly considered. Our patient presented with bilateral facial nerve weakness. In a study by Hoyle et al., (7) cranial nerve VIII is the third most commonly affected cranial nerve. Cranial nerve VIII involvement may present as hearing loss or vestibular dysfunction secondary to acoustic neuropathy. In a case report by Imran, et al., (2) they presented a patient whose primary symptom of neurosarcoidosis is vertigo as also manifested by patient in focus. The patient also complained of progressive blurring of vision. The optic nerve (CN2) is also involved in up to 38% of patients with neurosarcoidosis. This may present as progressive, painless or acute visual loss, papilledema, or optic atrophy. (1,2) Not present in our patient, but other presentations of neurosarcoidosis may be the following: hydrocephalus and chronic meningitis (2,8), mass lesions (2), seizure (9), hypothalamic and pituitary involvement and neuropsychiatric manifestations. (5,9)

Although, not yielding in this case, a brain MRI is the preferred diagnostic imaging technique in the diagnosis of neurosarcoidosis. T1-weighted images are useful in evaluating the optic chiasm, hydrocephalus, and spinal cord enlargement. Contrast studies for the evaluation of leptomeninges, parenchyma and cranial nerves is important (1-3,9) Whole body Gallium (Ga) scanning or Fluorodeoxyglucose PET Scanning, are ideal tests which were not performed on our patient; can be utilized to search the whole body for occult inflammation or neoplasia and therefore find suitable sites for biopsy. (1,2) It is important to take note that whole body Gallium scanning is insensitive to CNS lesions and shows uptake in only 5% of cases with CNS lesions, but may detect other systemic involvement in up to 45% of cases, and these cases usually have a concomitant CNS involvement. (11) CT Scan may be utilized as well but only shows findings in 40% of cases. (6)

His chest CT Scan showed a small calcified nodule and a subpleural bleb including axillary lymphadenopathies while his chest radiograph is unremarkable. Chest radiography, and thoracic computer tomography scan may reveal intra-thoracic involvement. (1) However, cranial CT Scan only shows findings, which may be hydrocephalus, calcifications or nodules, in 40% of cases. (6)

Also, unyielding in the patient, CSF analysis is helpful in the diagnosis of neurosarcoidosis. However it is non-specific. About 1/3 of patients with neurosarcoidosis will have normal CSF analysis findings as was the situation of our present case. (10) CSF analysis will be helpful in excluding central nervous system infections or malignancy. (2,5,7) An elevated CSF protein typically accompanies oligoclonal bands in patients with neurosarcoidosis but which was not found in this present case. In patients with leptomeningeal involvement, the CSF findings are as follows: 40-70% exhibit pleocytosis; 40-73% have elevated protein; and 10-20% have low glucose and oligoclonal bands and an elevated IgG index are encountered in up to 53%. (6) Our patient therefore does not appear to have leptomeningeal involvement.

Our patient presented with multiple facial nodules (cheeks, eyelids and nose) and a biopsy was warranted and would be helpful in the diagnosis of neurosarcoidosis. The essential lesion in sarcoidosis consists of focal collections of epithelioid cells surrounded by lymphocytes with giant cells lacking caseation reflected in our patient’s biopsy. In patients with systemic disease like sarcoidosis, they may present with skin lesions, lymph node inflammation and palpable nodules. A biopsy of these lesions is warranted. The sarcoid, noncaseating granuloma may be found in all organs and tissues, including the nerve roots, peripheral, and central nervous systems. (2-4,11)

It is not only neurosarcoidosis that presents with bilateral facial nerve neuropathy. Komurcu and Anlar (2015) (12) reported on a triad of repeating bilateral facial nerve paralysis, orofacial edema and fissured tongue described Melkersson-rosenthal syndrome (MRS). MRS is also a non-caseating granulomatous disease like neurosarcoidosis. Although biopsy was not done on the patient in their report, the patient was also treated and responded with steroids. (12)

Evident in the patient’s history and examination is the occurrence of right finger flexor weakness but was not substantiated in the repeat electrodiagnostic test. Not compatible with our patient but acute inflammatory demyelinating polyneuropathy (AIDP) is also a differential diagnosis of neurosarcoidosis. (6,7,13) In a report by Bhat et al.,(13) they presented and worked up a patient with symptoms and results compatible with AIDP, until a brain MRI showed multiple meningeal enhancements, and brain biopsy showed non caseating granulomas negative for acid fast bacilli and had marked improvement with high dose steroids. Polyneuropathy in sarcoidosis may present as chronic sensorimotor axonal polyneuropathy, multiple mononeuropathies and sensory polyneuropathy including small-fiber neuropathy. (6)  Since 1975, sarcoidosis has already been studied in the context of myopathy. (14) Hewlett and Brownell presented four cases of patients with proximal muscle weakness in which muscle biopsy of all patients showed well defined, non-caseating, epitheloid granulomata with giant cells, 3 of which were responsive to steroids. (14) Though in some studies, they state that myopathy in neurosarcoidosis may happen and be asymptomatic (1,4), but was ruled out in this present case who had a normal CK and EMG findings.

As with other systemic diseases, the mainstay of treatment for neurosarcoidosis is the administration of corticosteroids. (2,4) The present case is maintained on methylprednisolone 16mg/tab 1 tab daily. Tapering of steroid was attempted before but there would be recurrence of symptoms. Hence, azathioprine, an immunospuppresive agent, started at 50mg/tab 1 tab daily, was added to the regimen and maintained. The recent onset of neurologic symptoms, indicating an active phase of the disease is the most certain indication for steroid therapy. In the study by Hoitsma et al., (2010) an initial dose of methylprednisolone at 1mg/kg/day is recommended. In severe cases, high doses (500-1000mg) of intravenous methylprednisolone may be used for a few days to obtain a high initial loading dose. Therapy is to be given for several months. In many cases, it may last to several years.

If patients become resistant or intolerant to corticosteroids, immunosuppressive agents or anti-Tumor-Necrosis-Factor drugs are to be added in the regimen. Immunosuppressive or cytotoxic agents is helpful for refractory cases to corticosteroids. (2,4) Azathioprine, as used in our patient, requires monthly liver function tests and blood cell counts. Other immunosuppressive agents are Methotrexate, Mycophenolate and Cyclophosphamide. Anti-TnF agents may also be used such as Infliximab and Etanercept. (1-10)

Patients may have different responses to steroid treatment. The patient in focus presented with good response upon taking steroids. Some also treated with steroids may show improvement in findings in MRI, but may not show clinical improvement, and vice versa. It has to be taken into consideration also that steroid treatment comes with its own side effects. Mortality rates were 18% in a series of 37 patients and 31% developed steroid side effects, related to the high dose of steroids and longer duration of therapy. (1)

In this present case, the diagnosis of neurosarcoidosis was supported by the following: recurrent multiple cranial nerve palsies, the bifacial neuropathy being the most prominent, facial nodules with non caseating granuloma on histopathology, lymphadenopathies on chest CT Scan with the rest of the work ups being unyielding. Another highlight in this present case is the strong responsiveness to corticosteroids (IV and oral methylprednisolone). Having presented this case, neurosarcoidosis may be rare and hard to diagnose but is definitely one to highly consider especially in cases of recurrent cranial neuropathies, facial nerve at that.

Figure 2. Cranial MRI with MRA and MRV of the patient showing normal results.

Figure 4. Images of the patient’s biopsy of the eyelid nodules.

a and b. Granuloma formation with aggregates of epithelioid histiocytes (arrow) surrounded by chronic inflammatory cells