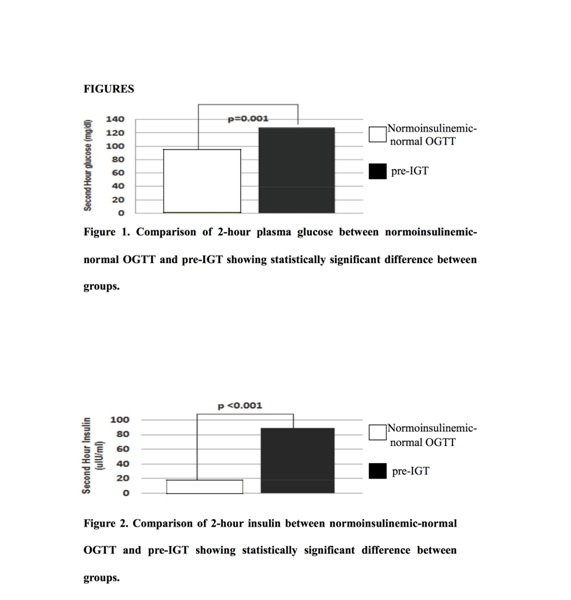 Diabetes mellitus type 2 is a disorder characterized by inability to normalize blood glucose due to insulin resistance with relative insulin deficiency from progressive ß-cell destruction. It is therefore detected with elevation of fasting glucose or impaired glucose tolerance.

Compensated hyperinsulinemia producing normal glucose is a state that preludes diabetes (1). The basal immunoreactive insulin is 10µIU/ml in fasting level and reaches peak concentration by 30 minutes, rapidly declining to baseline after second hour (2). In a study by Matawaran and Mercado-Asis (3), it was shown that high-risk individuals may present with normal 2-hour glucose (<140mg/dl) but with increased insulin levels (> 30uIU/ml). This state of compensated hyperinsulinemia which may reflect decreasing insulin sensitivity is thence termed pre-impaired glucose tolerance state or pre-IGT.  This supports the proposed schematic description by Olefsky and Kuzynska on the natural history of type 2 diabetes wherein insulin resistance is initially addressed by increase in β cell insulin secretion to maintain normoglycemia (1).

Glycosylated hemoglobin (HbA1c) is a convenient and reliable parameter used in diagnosis and monitoring of Type 2 DM but has not been explored in pre-IGT state. The objective of this study is to compare the 2-hour blood glucose, 2-hour insulin level, and HbA1c among normoinsulinemic-normal OGTT group and pre-IGT group.

This was a retrospective cross-sectional study of high-risk individuals who consulted in the outpatient clinic at the University of Santo Tomas Hospital (USTH) for evaluation of type 2 diabetes from 2000-2011. Demographic profile of patients such as age, height and weight were recorded. Subjects underwent 75-gm OGTT with 2-hour blood sugar and insulin determination. HbA1c was also measured.

The 2-hour glucose with insulin level and HbA1c of patients with normoinsulinemic-normal OGTT were compared with the pre-IGT group using t-test. Correlation between the 2-hour blood glucose and insulin level with the HbA1c was done using Pearson correlation analysis. Statistical significance was considered for p-value of less than 0.05.

Plasma glucose levels were within normal range at 90.68±26 mg/dL for normoinsulinemic-normal OGTT group and 128.60±18 mg/dL for pre-IGT group (Table 2) based on American Diabetes Association classification (4). However, the 2-hour blood glucose and insulin level were significantly higher in the pre-IGT group as compared to the normoinsulinemic-normal OGTT group (128.60±18 mg/dL and 89.29±68.82 mIU/mL versus 90.68±26 mg/dL and 17.40±8.15 mIU/mL, respectively) (Figure 1, Figure 2). There was weak positive correlation between the HbA1c and 2-hour blood glucose level between the 2 groups (r=0.4178) (Table 2). However, such correlation was not observed with insulin level.

Pre-diabetes is an intermediate stage prior to the development of diabetes mellitus and encompasses impaired fasting glucose (IFG) and impaired glucose tolerance (IGT). American Diabetes Association defines this as fasting plasma glucose of at least 100mg/dL but less than 126 mg/dL and/or a 2-h 75-g OGTT of at least 140 mg/dL and less than 200 mg/dL and/or A1C of 5.7-6.4% (4). The progression of pre-diabetes (IFG, IGT) to diabetes occurs over several years with an annual risk of 5-10% (5).

Pre-impaired glucose tolerance (pre-IGT) state represents an earlier stage in the pathogenesis of diabetes wherein the normoglycemia is attained by compensated hyperinsulinemia (3). Based on this study, normoinsulinemic-normal OGTT patients have glycosylated hemoglobin of 5%, and pre-IGT patients have significantly higher HbA1c at a mean of 6%. Following the ADA classification (4), a large number of high-risk individuals in the pre-IGT stage of metabolic derangement will definitely be missed. The HbA1c correlating with blood sugar in this study in both normoinsulinemic-normal OGTT and pre-IGT groups is another point of contention. This finding could influence re-stratification of individuals at high risk to develop diabetes mellitus by setting lower cut-off values.

The start of hyperinsulinemia at the pre-IGT stage is an important and critical issue for early clinical care and prevention of long-term complication of type 2 diabetes mellitus. C-peptide, a structure cleaved from proinsulin, is equimolar with insulin and can bind to different cell receptors activating signaling pathways (6). It can deposit in the vascular walls of diabetic individuals and bring about pro-inflammatory effect leading to atherogenesis (7). Vascular smooth muscle cell proliferation and neointima formation are contributed upon by C-peptide as shown in in vitro studies (8). This is probably the reason why in the study by Bahar et al (9), the risk of microalbuminuria which is a marker for atherosclerosis and coronary artery disease, is already high in IFG and IGT subjects. Similarly, retinopathy is found in 20.91% of IGT patients (10). Since insulin determination is not routinely done in the workup of high-risk individuals, beginning impairment of metabolic activity as evidenced by elevated insulin level would likely be missed out. Therefore, at the level of IFG and IGT, complications common in established diabetes are already seen (9, 10).

Medical intervention with lifestyle change and insulin sensitizing agent has been shown to decrease the risk of progression to diabetes mellitus by 52% (11) whereas 58% risk reduction in IGT group can be achieved with diet and exercise (12). Therefore, it could be predicted that intervention at the level of pre-IGT could prevent early development of macrovascular complications in a large number of high-risk individuals.

This present study has shown that individuals with pre-IGT have significantly higher 2-hour blood glucose and insulin levels, and higher HbA1c as compared to the normoinsulinemic-normal OGTT individuals. Furthermore, the HbA1c in both groups correlated with the 2-hour glucose but not with insulin levels. Our results have placed another challenge on what stage of the metabolic derangement must treatment be initiated.

There is no potential conflict of interest of authors relevant to this article.