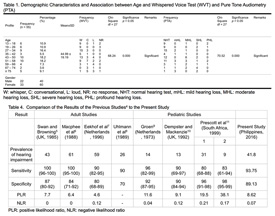 Disabling hearing loss is defined as hearing loss greater than 40 decibels and 30 decibels in the better hearing ear in adults and in children, respectively, and affects 360 million people worldwide.(1) Regardless of the cause, hearing impairment substantially disturbs communication, leading to academic,social and economic disadvantage.(1,2)  In Philippines, the hearing loss is estimated to affect 5.64 to 36% of the total population. Consequently, 56.4% and 67.7% of those with hearing disability were not able to complete high school education and had no income-generating job respectively.(3)

Knowing the sequelae of hearing impairment emphasizes the need for methods to detect it through a simple yet reliable test that could be performed easily by ENT specialists and general practitioners alike. Hearing impairment is a modifiable problem once it is detected. Early recognition of the problem leads to earlier intervention and rehabilitation, preventing it disabling effects.

The standard tools for the detection of hearing impairment have limitations in our setting wherein access to specialists and audiometric evaluation is not always possible. Formal audiometric testing requires time, training and technology that are not readily available. Screening through the whispered voice test (WVT) is an alternative that can be used to identify individuals that warrant further evaluation by ENT specialists. It is relatively simple and has been tested in both adults and children however, it lacks standardization, compromising its application in the primary care setting.

This is a prospective, non-randomized trial done in a tertiary private hospital. A total of 55 consecutive patients aged 13- to -85 year old who underwent hearing evaluation via pure tone audiometry were included in the study.

Two examiners performed pure tone audiometry and whispered voice tests independently and blindly. The tests were performed one after the other in no particular order.

Pure tone audiometry averages for each ear were interpreted and recorded based on the institution’s reference, the World Health Organization Hearing Loss Classification as follows: normal (0-25dB), mild (26-40dB), moderate (41-60 dB), severe (61-80 dB), and profound (81dB and above).

The researcher summarized the subjects’ characteristics and findings using percentages for dichotomous variables and means with standard deviations for continuous variables. Frequencies and means (± standard deviation) were used to describe the demographic data. Specificity, sensitivity, positive and negative predictive values, positive and negative likelihood ratios, and accuracy of the whispered voice test against standard pure tone audiometry were determined. The associations of the whispered voice test and pure tone audiometry to each other and to age were also established.

The data on age and gender were tabulated and presented in frequency and percentage as shown in Table 1. 55 patients were included with a total of 110 ears studied. It was revealed that 40% (n=22) are males while the remaining 60% (n=33) are females. With the above numbers, the gender ratio is approximately 2 male patients for every 3 female patients (2:3). The patients’ ages ranged from 13 to 85 years old with an average of 44.99. Cross tabulation of respondents’ age and whispered voice test result was done. Early 30’s respondents acquired the highest frequency of normal hearing and late 60’s respondents obtained a lower frequency of normal hearing when categorized using the whispered voice test. The Pearson’s chi-square was 68.24 with degrees of freedom of 27. Using 0.05 level of significance, the p-value was 0.000. Generally, there is significant association between age and whispered voice test. Similarly, cross tabulation of age and pure tone audiometry result was done. The ages of the respondents with normal hearing threshold were distributed in the age interval of 18-58 years. The chi-square value of age and pure tone audiometry was 70.52. The p-value between two variables was less than 0.05. Generally, the statistical analysis shows that there is significant association between age and pure tone audiometry.

The sensitivity and specificity of the whispered voice test were 93.75% and 89.13%, respectively. Positive predictive value was 92.31% while the negative predictive value was 91.11%. The positive and negative likelihood ratios were 8.62 and 0.07, respectively with a computed accuracy of 91.82%.These results are tabulated against the results of previous studies4 (Table 4).

Accuracy of the Whispered Voice Test

The sensitivity and specificity of the whispered voice test in this study was comparable to previous studies. In a systematic review by Pirozzo et al.,(4) the whispered voice test yielded a sensitivity of 82-100% and a specificity of 70-87% in adults. The prevalence of hearing impairment in this population was 26-61%. In the same study, it yielded a sensitivity of 61-99% and a specificity of 84-99% in the pediatric population. The prevalence of hearing impairment in this population was 9-31%. The likelihood ratios and the prevalence of hearing impairment in this study are likewise comparable to the studies reviewed by Pirozzo. In the study of Swan and Browning, (5) a total of 202 ears among 17- to 89-year-old were studied. Occlusion of the non-test ear was done for masking and the tester stood behind the patient to avoid lipreading. Eekhof, (7) on the other hand, included 124 ears belonging to adults 55 years old and above only. The sensitivity and specificity of the whispered voice test was compared to Pat 225, Audioscope-3, and Micromate-304. Among these, the whispered voice test was the least expensive and relatively, had high sensitivity and specificity compared to the other tests.  Both the Audioscope-3 and Micromate-304 had a sensitivity of 100% however, sensitivity were low at 42% and 39%, respectively. The tests were also done in a generic consultation room with no sound-proofing. Test of interobserver reliability showed variable outcomes among examiners owing to the non-standardized volume of the whisper used. Groen (9) included a total of 197 5-year-old children in his study. In his method, the test was done starting at a 3-meter distance, with occlusion of the non-test ear and using spondee words. Testers for the whispered voice test and audiogram halfway into the test to minimize biases. Dempster and Mackenzie’s (10) study also included only the pediatric age group composed of 141, 5- to 12-year old children using used numbers and/or letters. Masking was achieved by tragal rubbing of the non-test ear.  Since there was no significant difference in the results of the right and left ear, only data from the right ear were presented. Two independent observers did the test in a generic out-patient setting but did not included a test using non-specialists. Prescott (11) initially confirmed assumptions on the human voice prior to implementing his study (whisper: 30-45dB, conversational voice: 45-60 dB, and loud voice: 60-80 dB). He then proceeded with a hospital based study composed of 177, 3- to 12-year-old children. This was followed by a school-based study composed of 201 3- to 7-year-olds.  Spondee words were used in this study.

This study showed a sample predominantly composed of females (60%) with a ratio of 3:2 to males (40%) with a mean age of 44.99 ± 19.19 years. The populations wherein age-related changes in hearing can be observed (12) and that would highly benefit from screening are well represented. This study was composed of men and women aged 48-85 years who underwent a screening test to determined the sensitivity of a portable audiometer and results show similar detection rates to previous studies. Approximately 10% (n=6) of the subjects belonged to the pediatric age group (d 18 years old) wherein the prevalence of hearing impairment is generally lower at 1.65%,(13) after total ascertainment of children with hearing impairment and a capture-recapture analysis in the United Kingdom.

The whispered voice test is an accurate (91.82%) screening tool in the detection of hearing loss. The whispered voice test and pure tone audiometry results are associated with age and with each other. ENT specialists and general practitioners in the rural and urban settings can use it as a preliminary test prior to requesting routine pure tone audiometry in patients with subjective complaints of hearing loss. The test can be done with no need for formal training, in a short amount of time, and in typical clinic conditions. However, it does not have the ability to differentiate among the different types of hearing loss and distinguish between high- and low-frequency hearing losses.

We recommend the inclusion of more pediatric patients in the study as well as an overall increase in the number of subjects. The success of the test is dependent on the subject’s ability to follow instructions hence it is important to always ensure that the external auditory canal is properly and adequately occluded in order to prevent false negative results. The addition of tragal rubbing can further prevent the occurrence of false negative results. Furthermore, using spondee words or a combination of letters instead of numbers can provide a different perspective in the implementation of the test in that it can potentially classify subjects into those with high- and low-frequency hearing loss.

Table 4. Comparison of the Result of the Previous Studies4 to the Present Study

DISCLOSURE AND CONFLICT OF INTEREST

The authors have no financial or other (including personal) relationships, intellectual passion, political or religious belief, and institutional affiliations that might lead to a conflict of interest.