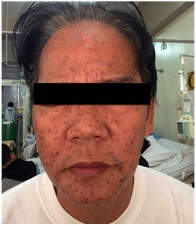 Vricella-zoster virus is the etiologic agent of varicella (primary infection) and herpes zoster (reactivation of latent infection). It is commonly observed among school-aged children. In tropical climates, more cases are reported among adults. Although varicella is most often a relatively benign and self-limited childhood illness, the disease can be associated with a variety of serious and potentially lethal complications in both immunocompetent and immunocompromised persons.(1, 2)

The incidence of neurologic complications associated with varicella is estimated to be 1–3 per 10,000 cases. The rarer of these complications is GuillanBarre syndrome (GBS) or acute inflammatory demyelinating polydradiculoneuropathy (AIDP), with less than 50 cases in reported literature. (1-4)

We report a case of a 51 year-old Filipino male who presented with bilateral lower extremity weakness and numbness indicative of a demyelinating polyradiculoneuropathy two weeks after a primary varicella infection.

Our patient is a 51-year-old male admitted due to progressive numbness and weakness of the lower extremities.

In early March 2015, he had intermittent undocumented fever, followed shortly after by the appearance of vesicular, pruritic, non-painful rashes on his upper back, which eventually spread to his face, chest and extremities. Interval history showed lysis of the fever after three days but there was worsening of the rashes.

Two weeks after the appearance of the rashes, the patient began to experience numbness on both his soles and palms. He also noted difficulty in walking and making precise steps as he easily lost balance. He preferred to stay seated but was still able to ambulate and maintain a standing position with assistance. No weakness of extremities was reported at this time.

He sought consult at a clinic and was assessed with a non-specific nerve problem. No work-up was done. He was given Vitamin B complex, which did not afford relief of his symptoms. Four days later, he noted progression of the numbness from his soles to the lower third of his distal legs. This was now accompanied by weakness of his distal legs, feet and handgrip. He could no longer ambulate and maintain a standing position. He also experienced dull pain on the palmar area of both hands, extending to his forearms, upper arms and shoulders, most prominent whenever he tried to reach out for an object. No disturbances in bladder or bowel functions, slurring of speech, facial asymmetry, double vision, or dysphagia were noted.He has history of hypertension and ismaintained on losartan 40mg/tab 1 tab BID. He also has a family history of hypertension and diabetes. No other family members presented with symptoms similar to the patient. Fasting blood sugar of this patient showed normal result at 98.10 mg/dL (NV <126mg/dL).

Physical and neurological examination showed multiple generalized hyperpigmented scars (Fig. 2). He had intact cognition and cranial nerve functions. On tandem gait, he had a tendency to fall on either side. Manual motor testing revealed a score of 4/5 for both wrist extensors and flexors, finger abductors and adductors, as well thumb flexors and extensors of both upper extremites. The rest of the upper extremity muscle groups were scored 5/5. For both lower extremities, a score of 4/5 was given to plantar flexors and dorsiflexors, as well as the plantar flexors and dorsiflexors of both big toes. He had no biceps, triceps, and brachioradialis reflex. He was hyporeflexive on both knees and ankles. On sensory examination he had a 20% sensory deficit to light touch and pinprick in both lower extremities, he had impaired vibration sense and position sense in both upper and lower extremities. We noted mechanical and touch allodynia on both lower extremites, distal more than the proximal. He tested positive on Romberg’s test and was ataxic on ambulation. He had a wide-based stance and gait, irregular stepping, with a tendency to stagger, and inappropriate timing of foot placement. There was no Babinski reflex.

Figure 1. Course of the illness.

Lumbar puncture and CSF analysis of this patient showed normal opening and closing pressure, as well as CSF glucose levels. There was elevation of CSF protein at 69mg/dl (NV 15 to 45 mg/dl). CSF Varicella virus IgG was at 1.8 mIU/ml (NV 1.3 mIU/ml)IgM was at 1 mIU/ml (NV 0.9 mIU/ml) indicative of a past varicella infection.Nerve conduction velocity studies of all extremities and the face showeddelayed latencies, prolonged conduction velocities, temporal wave dispersion, proximal partial conduction block, and prolonged or absent F-responses (Fig. 3, Table 1).

The patient was closely monitored withspontaneousgradual improvement of symptoms while admitted. Gabapentin 100mg/cap 1 cap TID was given to address his allodynia.

He was completely asymptomatic when he was last seen 2 months after discharge on June 2015.

Varicella zoster infection may cause several neurological complications like myelitis, aspectic meningitis, meningoencephalitis, ventriculitis, herpes zoster ophthalmicus and AIDP. (5) Cell-mediated immunity and other degrees of immunosuppression are known to follow viral infections. There is depression of tuberculin reactivity in varicella infectionsuggesting the role of immunosuppression as a contributing factor in triggering an autoimmune disease of the peripheral nervous system. (6, 7) It is possible that viral infections may reduce suppressor T cell activity thereby leading to proliferation of few T and B lymphocytes, which are normally present in humans and recognize nervous system antigen. (8) Reduction of the suppressor T cell subpopulation in patients with AIDPis consistent with this hypothesis. AIDP is a post-infective immune-mediated phenomenon, which causes rapidly progressive, diffuse proximal and distal weakness of the limbs, accompanied by sensory loss and areflexia. (9)

Symptoms of involvement of the nervous system following varicella develop between the fifth and twentieth day after the appearance of the rash, usually in the first half of the second week. (10) Antibodies positive to gangliosides can be attributed to poor recovery or rapidly reversible weakenss. (11) This is can be considered as the limitation of this study as this CSF examination was not determined.

The clinical picture and nerve conduction velocity studies result of this patient is suggestive of a demyelinating type of sensorimotor polyneuropathy. Likewise, the appearance of vesiculopapular rashes following a history of fever is highly suggestive of a primary varicella infection.

Figure. 2. Multiple generalized hyperpigmented lesions over the face and back.

Table 1. A summary of the nerve conduction velocity abnormalities in this patient